Could there be more action on gun control legislation? 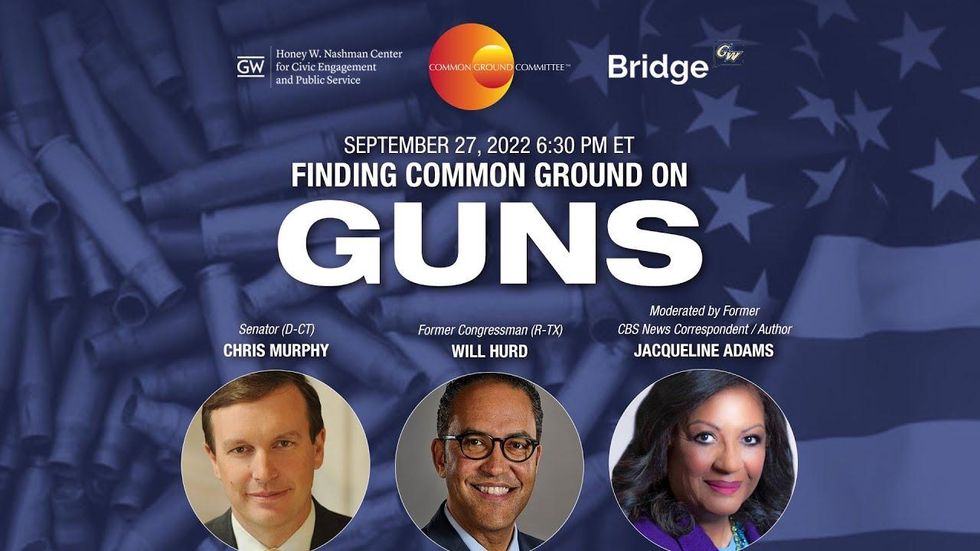 Granted, Sen. Chris Murphy and former Rep. Will Hurd have a personal stake in gun control laws. But their optimism regarding the potential for additional laws regulating gun ownership is rooted in data and momentum.

Murphy (a Democrat) represented Newtown, Conn., during the massacre at Sandy Hook Elementary. Until this year, Hurd (a Republican) represented Uvalde, Texas, site of the school shooting that prompted Congress to pass the Bipartisan Safer Communities Act this summer.

Thanks to Murphy’s collaboration with Republican Sen. John Coryn of Texas, Congress enacted the first major gun control law in decades. And yet it didn’t include some ideas that are overwhelmingly popular with the public, such as universal background checks.

Tuesday night, Murphy and Hurd spoke about the potential for further action. The key, they say, is to understand that both sides of the debate have legitimate positions.

“I think most Americans actually would say we can do both, we can actually protect people’s right to own guns and regulate that right. And the two are not mutually exclusive,” Murphy said.

“When you start with an issue that we agree on, then you can start talking about the things that we should be doing to ultimately solve the problem,” Murphy said.

Control of the Congress is up for grabs this fall, and the parties are battling in a number of big gubernatorial races as well. But in most states there’s far more on the ballot than just candidates.

Voters will determine the fate of 132 ballot initiatives across 37 states, and about a dozen of them affect democracy itself.

In three states (Arizona, Arkansas and Colorado), voters will consider whether to change the ballot initiative process itself.

And ballot measures in seven states could change the rules for how people vote:

In the latest episode of “Democracy in Danger,” legal expert Christopher Sprigman advises the Supreme Court’s conservative justices that Congress has the authority to rein in the judiciary – if lawmakers are willing to act.

Katie Fahey joins The Great Battlefield podcast to talk about founding Voters Not Politicians, which succeeded in banning partisan gerrymandering in Michigan and her current work as head of The People, which engages Americans in the work necessary to make change through ballot initiatives.

These are the most difficult states to vote in (The Hill)

Being Blue in a Red Environment - Braver Angels - Oct. 1

Hate Speech: How Does It Affect Us? - Crossing Party Lines - Oct. 2