Will the United States fulfill its promise to the Cherokee Nation? 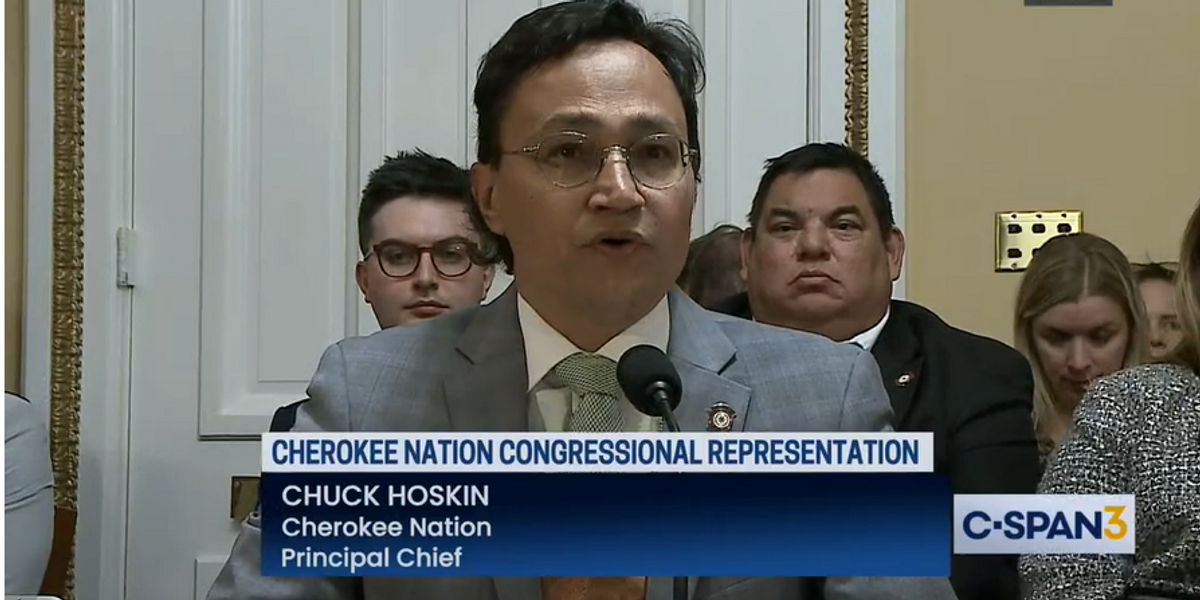 In 2019, the Cherokee Nation named a delegate to the House of Representatives, a right granted in exchange for vacating land in the Southeastern portion of the United States. Except Congress never took the legislative steps necessary to seat a Cherokee delegate.

The House Rules Committee took a step toward possibly rectifying that situation Wednesday, when it conducted a hearing examining the issue.

“Cherokee Nation has, in fact, adhered to our obligations under these treaties. I’m here to ask the United States to do the same,” said Chuck Hoskin Jr., the principal chief of the Cherokee Nation. “It's time for this body to honor this promise and seat our delegate in the House of Representatives. No barrier, constitutional or otherwise, prevents this.”

The committee, including Chairman Jim McGovern and ranking member Tom Cole appeared open to creating a seat for a non-voting delegate. (Cole, himself a member of the Chickasaw Nation, represents Oklahoma, which is home to much of the Cherokee Nation.)

“For far too long, in our nation’s history, the federal government accumulated a sorry record of making promises to tribes and then breaking those promises as soon as it was expedient to do so,” Cole said.

The Senate began moving through its remaining agenda items yesterday, advancing a bill protecting same-sex marriage rights. At some point prior to the end of the year, senators will likely vote on a bill to protect future elections.

The House has already passed legislation firming up the procedures through which Congress and the vice president finalize the counting of electoral votes. The Senate has its own version of the bill, which advanced out of committee in September and appears to have enough support to overcome a potential filibuster.

The Senate and House bills are slightly different, so the two chambers would likely need to resolve the remaining discrepancies.

“Everyone understands that it must pass this year or not at all,” said Keith Allred, executive director of the National Institute for Civil Discourse.

From the archive: A bold idea for Liz Cheney

Back in August, The Fulcrum’s contributor Lynn Schmidt made an unusual suggestion to help heal the partisan divide that the Jan. 6, 2021, insurrection made even worse. Following Rep. Liz Cheney’s primary loss, Lynn suggested Democrats nominate Cheney for speaker of the House if they retain the majority. While Republicans are inching closer to taking control, Rep. Kevin McCarthy’s path to the speakership is full of intraparty potholes. So maybe it’s still worth considering the idea.

Mark Bauer of Rank the Vote joins the latest episode of “You Don’t Have to Tell” to discuss the surprising impact independent candidates had on the midterm elections, Donald Trump's political future, and next steps for electoral reforms such as ranked-choice voting.

Despite Reforms, Parolees Had Trouble Voting In Midterms (Law 360)

Why it takes California so long to count its votes (CNN)

Democracy on the Ballot: What the 2022 Election Results Mean for Business - Business for America - Nov. 18

Reform in 2023: A season of public rituals offers hope more than fear