Marlowe is a freelance writer, essayist, former English professor and LGBTQ+ activist who splits her time between Rochester, NY and Baltimore, MD.

Jasper Johns' work will be on display in two of the country's most famous art museums concurrently, through Feb. 13, 2022. Both the Whitney Museum of American Art in New York and the Philadelphia Museum of Art have collaborated to present the 91-year-old artist's most comprehensive exhibit yet, "Mind/Mirror."

Johns' career spans some 65 years. A Presidential Medal of Freedom recipient, the painter came of age around the time abstract expressionism had taken hold in the New York art world. Jackson Pollock, Willem de Kooning and Mark Rothko were some of the more notable artists creating "cathedrals … out of their own feelings." Johns, one could argue, took this concept and turned it on its head with his own unique style.

Johns' early artistic rise coincided with the waning of the "ab ex" movement. Some suggest that his younger work pays homage to this school while also nodding to the emergent pop art scene — he pulls off a curious, thought-provoking blend of the quotidian and authentic gestural self-expression. Among Johns' favorite subjects, the American flag. Why the flag? Johns is notoriously tight-lipped when it comes to the interpretation of his work. His party-line response when asked about his fascination with the flag is to say that the imagery comes from "things the mind already knows." A New York Times piece on his 2018 retrospective at the Broad Museum in Los Angeles describes Johns' style as one that "claim[s] public symbols for the realm of inwardness and private experience."

So what exactly is Jasper Johns' "private experience" of the public symbol that is the American flag? This is of course a question the artist has never really answered, but one nevertheless that a number of his paintings with their recurring stars-and-stripes motif poses. Two of the artist's most iconic works, "Flag" and "Three Flags," have been given the lion's share of the press for the "Mind/Mirror" exhibition. This doesn't really seem a coincidence, as art, culture and current events all seem to have a rather curious way of converging on provocatively interpretable planes. Gazing through the lens of the moment's political and social climate and trying to understand Johns' "flags" accordingly, means contextualizing the art. But what exactly is the context?

The flag has been the subject of many artists' work; Johns is not unique in that endeavor, though he is perhaps among the most famous, if not most enigmatic, depicters of Old Glory. David Cole and Keith Haring, for instance, also created highly memorable art using the flag as a prompt: 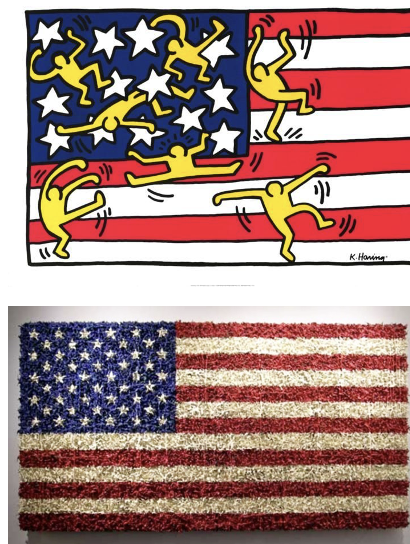 Haring's trademark faceless figures tend to signify the common humanness of people in this country while, at the same time, suggesting that our differences are what gives the flag any sort of meaning. Cole's iteration featuring toy soldiers melted down and painted over in red, white and blue is intended to evoke in an "emotional, visceral way — the way the world is now."

If we look at Johns' iconic "Three Flags," we encounter a representation of "flag as subjective experience" versus just "flag as flag." One of the most intriguing aspects of this particular piece is what it was made of. Johns used encaustic, which is a wax-based substance. The results are textural, meaning there is a tactile quality to this painting that just screams out for people to touch it (though the folks at the Whitney would highly advise against this). In this implicit call to touch, perhaps the artist is suggesting that people can stake their own claim on this patriotic territory, and that's the point. The dimensionality here is also key, giving the flag a distinct 3D space of its own that could also be interpreted as invading the space of the audience. 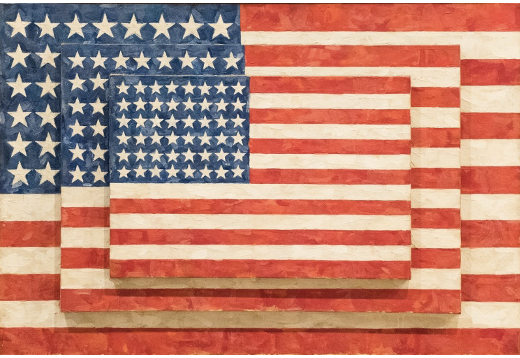 As the artist himself is not exactly forthcoming about what we are "supposed" to see, it is left up to the individual onlooker to determine what in fact they are looking at. Are they seeing an emblem of liberty and justice for all? Is it a nostalgic symbol of the world our grandparents and parents went to war to preserve? Or is it something else?

Is it, for example, what singer Macy Gray called a "dated, divisive, and incorrect" symbol of the Jan. 6 insurrectionists? Is it that which compelled NFL quarterback turned civil rights activist Colin Kaepernick to take a knee? Or, might the American flag be a blank canvas, as apparently Johns first envisaged, there for the political/cultural/social taking? We need only look around at the versions of Old Glory that have sprung up throughout the years —each with its own messaging, each representing its own symbology and each laying claim to its own 3D space: 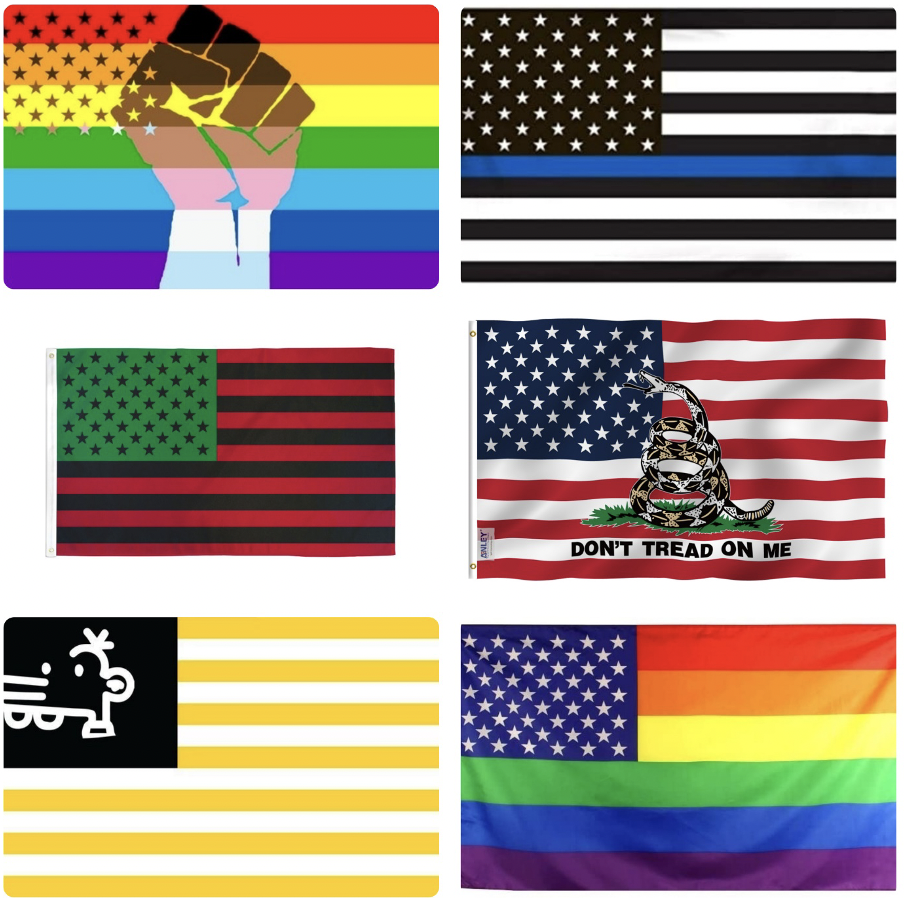 So where does this leave us in terms of what the flag means today, in terms of what Jasper Johns was trying to "say" with his recurrent use of the symbol, in terms of our own journeys where Americanness is concerned? I have to admit, I personally harbor some ambivalence when it comes to the Stars and Stripes. As a member of the LGBTQ+ community, I am sometimes anxious and feel "apart" when I see the flag angrily waving in righteous indignation, red-toothed and scary. As Eileen Myles described Jimi Hendrix's version of "The Star-Spangled Banner," to me it is in some ways both "sour and noble."

But then, I think of my immigrant mother who flies a flag on her front porch because she is proud of what that flag symbolizes and the space it gave her to carve out a better life here, to embark on a fulfilling career and to raise a family.

Every day I take a walk around my neighborhood and honestly, I have to say I never noticed this until I began working on this article: 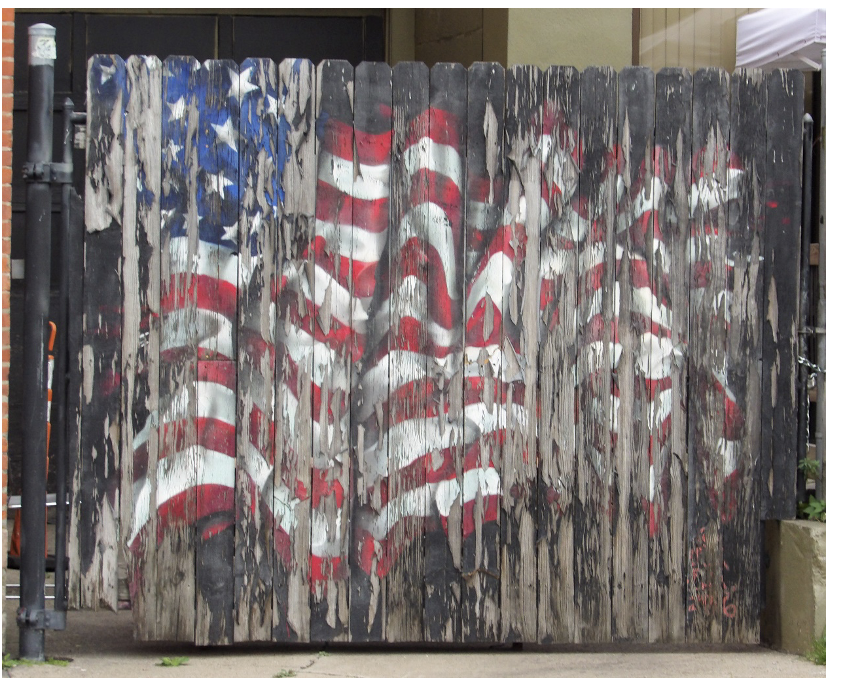 "On the Fence" photo (Marlowe)

From Your Site Articles
Related Articles Around the Web
art