What the results of the midterms mean for women’s representation, by the numbers

Maura Healey was elected governor of Massachusetts, becoming one of a record 12 women to lead a state at the same time.

On the heels of two record election cycles for women candidates, 2022 cements a new normal for levels of representation. The number of women in Congress has stabilized, and next year a record-breaking number of women will serve as governor — including the first out lesbian governor in the country’s history.

While women’s representation didn’t make big gains, it’s also not backsliding, said Debbie Walsh, director of the Center for American Women and Politics (CAWP). “This is much more status quo. We aren’t going to have the [representation gains of] 2018 and 2020 elections every cycle, although we’d like to.”

While a record 12 women are set to serve as governors, no records were broken for representation in Congress this year — still, at least 24 percent of U.S. House members and senators will be women. According to data from CAWP, of the 259 women nominees for seats in the U.S. House, at least 108 have won their races. Of 20 women nominees for Senate seats, four have won so far.

As of November 10 at 2:15 p.m. Central time, 21 House races and two Senate races with women nominees remain uncalled. However, The 19th has included several uncalled races into representation tallies — as one of the Senate races and two of the House races are between women. There have been no issues with vote counting, but in some states the only requirement on timing is that mail-in ballots have to be postmarked by Election Day, and as such wouldn’t have been picked up until that night or the next morning, so those ballots are still arriving and being tallied.

There’s still uncertainty about the number of women who will serve in the House, as 19 races with women nominees remain to be called. However, at least 110 women — a quarter of the House — are expected to serve. 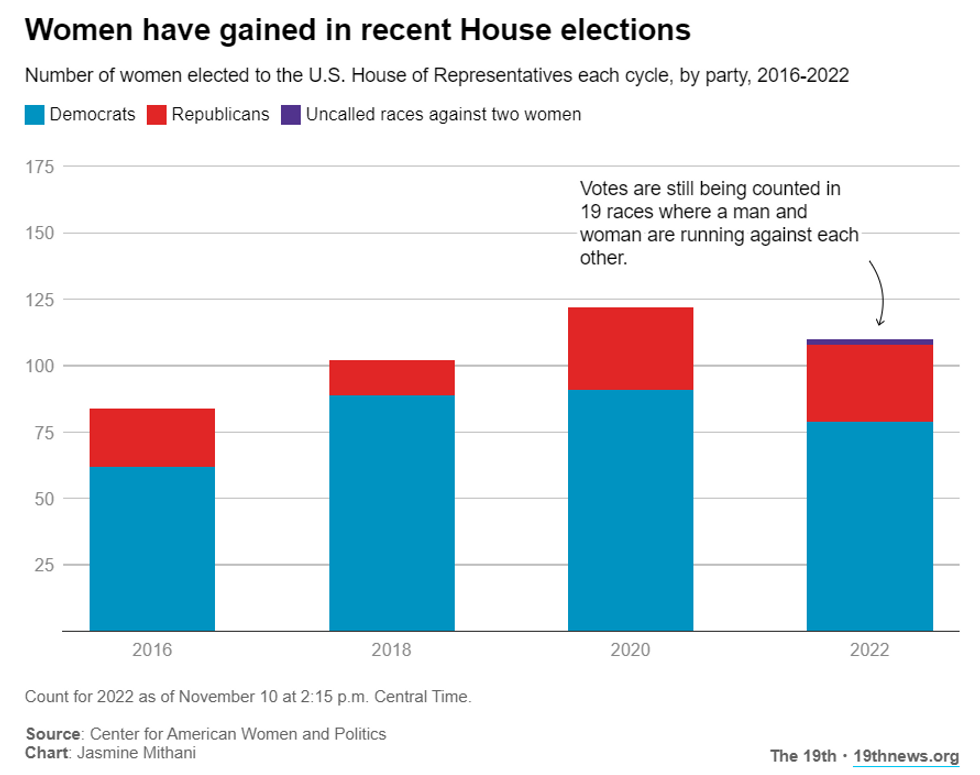 The past two election cycles showed that women are good candidates to back, said Kelly Dittmar, CAWP’s director of research. “Women are in these crucial races and crucial positions to determine the balance of power,” she said. “I think at least thus far in the results we're seeing on the Democratic side, women are key to keeping power.”

Part of the reason representation has stabilized is an increase in woman versus woman races — as was the case for Democratic incumbent Elaine Luria, who lost her race for Virginia’s 2nd District to Republican Jen Kiggans.

Currently,a minimum of 24 women senators are slated to serve next year, including one from Alaska, where two women are left in the running and votes are still being counted. Nineteen of those women senators were not up for election in 2022. The number could be as high as 25 if Democratic incumbent Catherine Cortez Masto, the first Latina senator, wins reelection in Nevada against Adam Laxalt.

The majority of elected women senators are White — 21 out of 23. The other two women senators, Tammy Duckworth of Illinois and Mazie Hirono of Hawaii, are Asian American. While both chambers are roughly a quarter women, the women in the House are much more racially diverse. More frequent elections, as well as more seats, means more opportunities for more women to run in that Chamber. 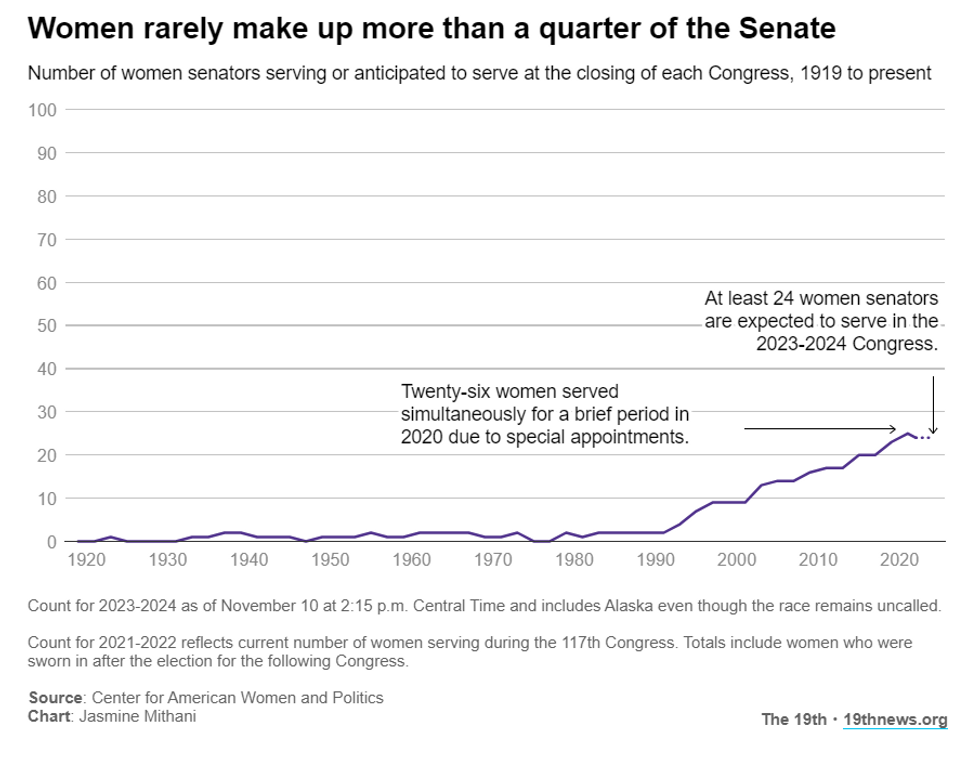 The number of women senators has slowly grown since the 1970s but has plateaued in recent years. The current record for number of women serving simultaneously was set in 2020, when 26 women had seats due to special appointments. However, the record was short-lived because Martha McSally lost her Arizona seat to Democrat Mark Kelly in the election that year.

“If one [Black] woman leaves, there’s no one else there,” Walsh said. “These gains are fragile, and we need to do more work on that front. Keeping a spotlight on it is really important.”

Maura Healey’s gubernatorial win in Massachusetts made her the first out lesbian elected to the seat. If Tina Kotek wins in Oregon — as of writing, she is leading — she will also be one of the first LGBTQ+ women governors.

Notable is that there were two races with all women candidates: in Arizona and Oregon. Both are undecided as of publish time. Dittmar and Walsh both agree these types of contests are a sign of progress.

“It's also a really good reminder that women get to be as diverse in their viewpoints and perspectives, priorities, etcetera, as their male counterparts,” said Dittmar. In these all-women contests, gender isn’t neutralized but rather deployed in different ways, she explained. “We get to see that being a woman candidate, being a woman doesn't mean the same thing for everybody.”

Still, this record means that women make up only 24 percent of state executive leadership. And all of those women except one are White: New Mexico Gov. Michelle Lujan Grisham, a Democrat who won reelection this week, is Latina. No state has yet elected a Black women governor, as Democrat Stacy Abrams lost her second Georgia gubernatorial bid to incumbent Brian Kemp.

Reflecting on representation so far, Dittmar was frank. “Progress is not inevitable.”

“We worried a lot in ’18 that folks would declare it the year of the woman and then they would declare the job done,” she said. “I don’t think that’s why this year is necessarily a stasis, but I think we have to be wary and cautious about that.”

Ballot Box: What Worries You?