Women demonstrate on International Women's Day in Mexico, which has achieved gender parity in government.

Usalis is the strategic partnerships manager at RepresentWomen, a nonpartisan group advocating for policies that would result in more women holding office.

March 8 was International Women’s Day, established by our foremothers in 1910 as a day for women to join together and fight for equal rights. Although it has essentially evolved into International Virtue Signaling Day by governments, corporations and groups across the globe that aren’t actually doing much for women’s rights, I think it is an important opportunity to reflect on the status of women.

We at RepresentWomen are, of course, honor this day by reflecting on the status of women in politics.

The valedictorian of gender balance is …

Thanks to the hard work of the Inter-Parliamentary Union, we know there are continued global trends towards gender balance. Since 1995, the global average of women in elected positions has increased from 11 percent to 26 percent. While still a far cry from gender balance, it’s great news that we’re headed in the right direction. Also exciting is that the Americas lead the way in the race towards gender balance, with 34 percent average regional representation – the highest share of representation in the world! 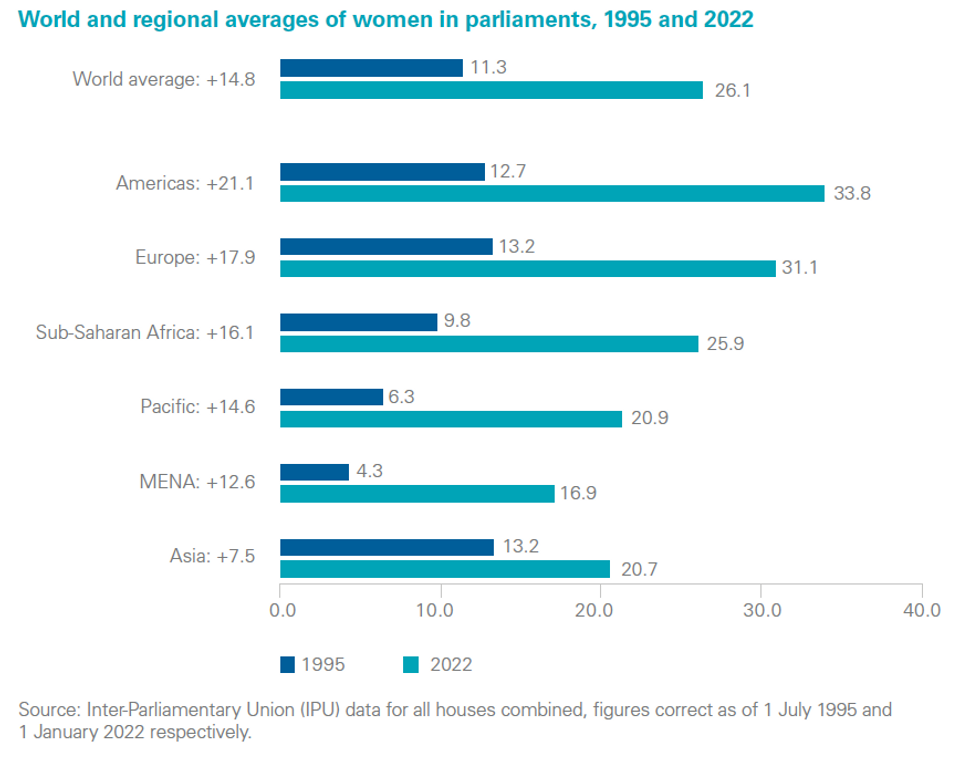 When I dug a bit deeper into these numbers, I realized pretty quickly that these gains in representation in the Americas are all thanks to our neighbors to the south: Mexico has 50 percent women in its government, Costa Rica has 46 percent, Argentina is at 45 percent … the list goes on. On top of that, Peru’s representation rates jumped by 14 percent and Chile’s by 13 percent — in one year! And the United States? In 2021, we dropped to 72nd in our global ranking for gender parity with a staggering average of 26 percent representation in Congress.

The United States is that classmate who actually brings the average down, and who all the other hardworking students glare at. The fact is, average representation rates in the Americas would be even higher without us.

The tools for success

So how are these countries achieving gender balance, and in record time? Oh I know, I know. It’s because the women running for office are more qualified and there’s just less gender bias there. 🙄

The democratic countries in the Americas that have achieved at least 40 percent representation in government have one thing in common: All of them have embraced policy tools that get at the root of gender imbalance. Most of them have adopted innovative gender quotas and modernized electoral systems that use proportional representation rather than winner-take-all voting. These system upgrades dismantle outdated structures fortified by built-in mechanisms that protect the status quo and keep diverse women out of office. These system upgrades clear out the cobwebs and create space for a 21st century democracy. 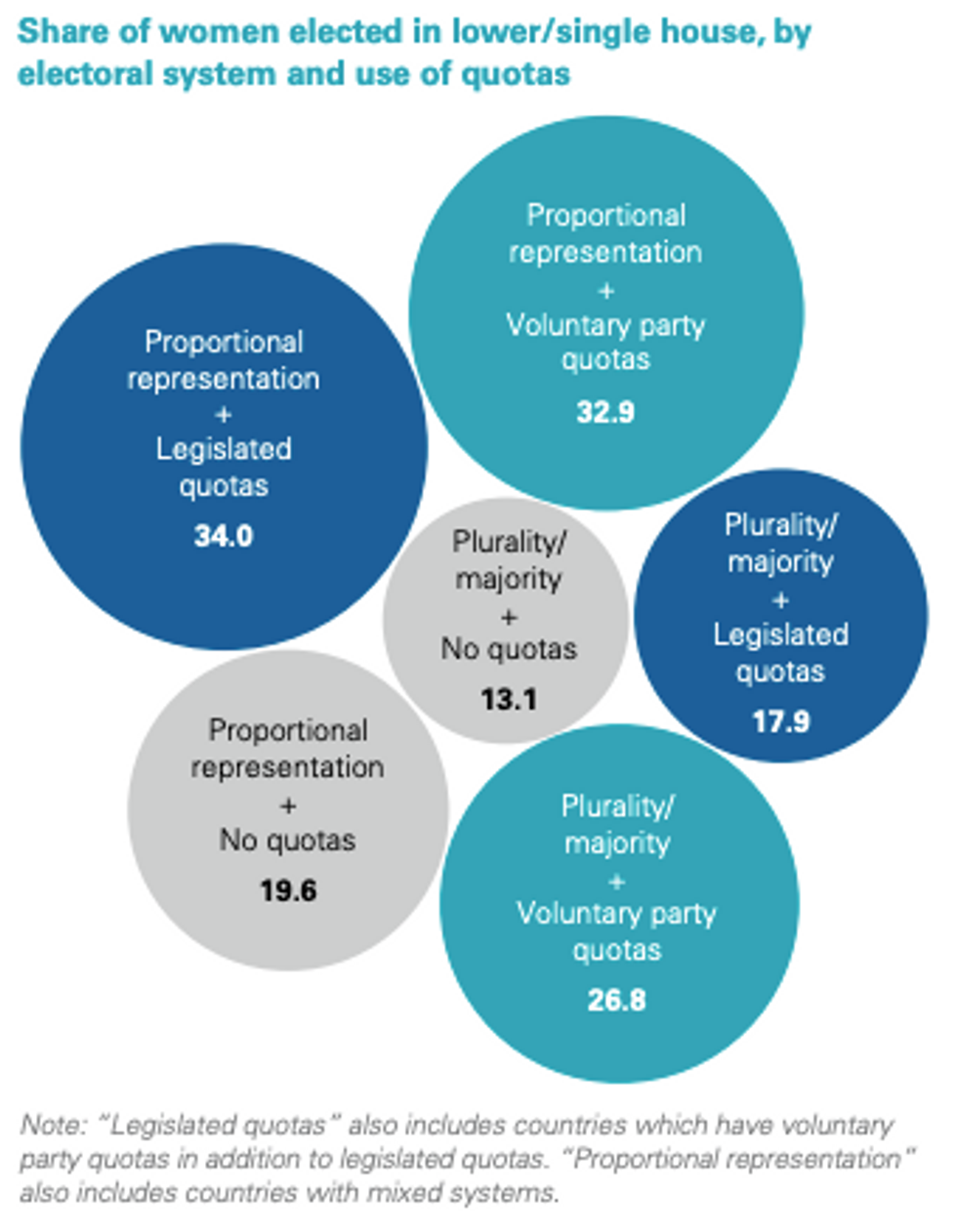 Source: Women in Parliaments in 2021 Report 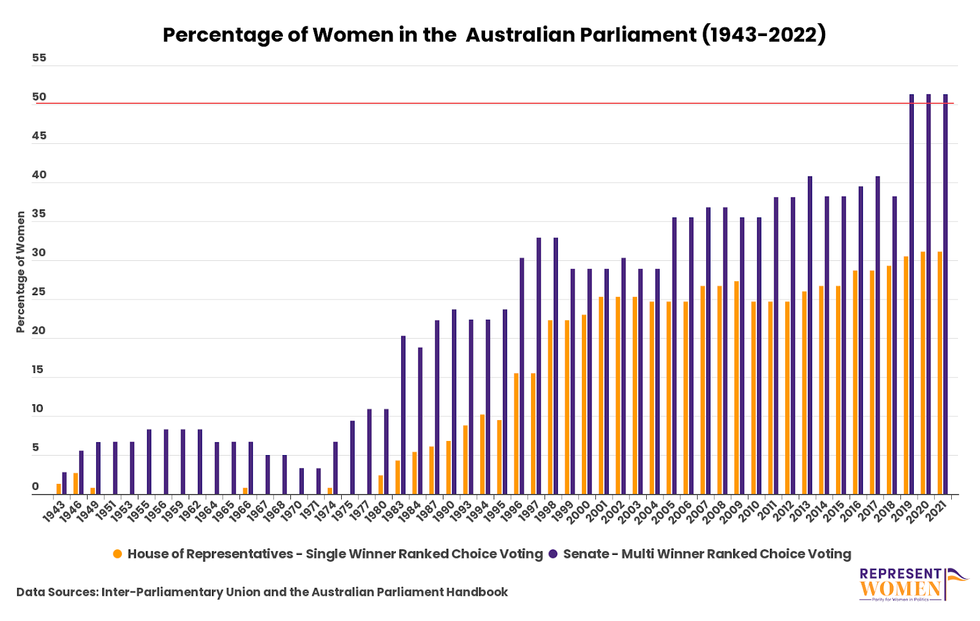 The urgency cannot be understated

Our current system was designed to protect the power of those already in office, and our history and culture has dictated that those incumbents are vastly white and male. To fan the flames of the incumbency advantage, redistricting has yet again shrunk the number of competitive districts, which we are already seeing the effects of in this year’s midterm elections. Add to this the fact that the United States is no longer considered a “full democracy,” and the urgency and necessity of reform cannot be understated.

It is evident that we need the best and the brightest to tackle these challenges facing our democracy, and cutting women out of the equation severely limits the candidate pool. To overcome powerful systemic barriers like these we need powerful systems change. As seen in Australia, fair representation voting will produce continued progress and lasting effects. Add other critical reforms like expanding the House and we will create more open seats that women also have a greater chance of winning.

It’s time we clear out the cobwebs and bring our democracy into the 21st century.