Having no party ID is actually taking a side — for independence

"Being a stringent 'die-hard' of anything can almost never be a good thing and if more voters took the time to consider that there are more than two sides to every issue, our democracy would be all the better for it," writes Alexa Mikalaski.

Mikalaski is a staff writer for Independent Voter News and marketing coordinator for IVC Media, a digital marketing firm affiliated with IVN.

In a country that often feels divided between two camps, the Republicans and the Democrats, independent voters could really be the future of politics in America.

While polarized, if not combative, politics are nothing new (e.g., the election of Abraham Lincoln in 1860 that tore the nation apart), there is something undeniably different about the political climate that we have had for the last few years.

Independents know it too, as made obvious by the substantial amounts of voters leaving both political parties. According to a poll by Gallup, the trend of voters who consider themselves as independents has steadily increased to over 40% in 2020.

Our political views are no longer limited to general perspectives of how the world should work or the ideal size, scope, and function of government. These are the politics of old, that have long since been replaced with a newfound sense of identity and in some cases, stringent party loyalty.

These days, your political beliefs define you.

Whether a member of the Republican Party, Democratic Party, or no party at all, our political beliefs have become the very foundation of who we are as individuals.

Or is that just what the two major parties and mass media want us to think? Could it be that it works in the two parties' favor for us to remain divided on our deeply ingrained moral principles? Food for thought...

If you search for studies regarding why people get so worked up over politics a million results will pop up with headlines such as, "Americans are making themselves sick over politics", "Why is America so angry?", and "Today's Politics May Be Bad for Your Health".

Is this all a testament to just how nasty our party politics have become?

In 2016, a study by Jonas Kaplan, a psychologist at the University of Southern California, showed just how closely we hold political beliefs in relation to our personal identities.

The study involved the use of functional MRI to measure the brain activity of 40 individuals with strong liberal political views as they encountered arguments against their beliefs.

Some of the challenged beliefs were considered strongly-held but non-political beliefs such as "A college education generally improves a person's economic prospects."

Other statements were considered strongly-held political beliefs such as "Taxes on the wealthy should generally be increased." 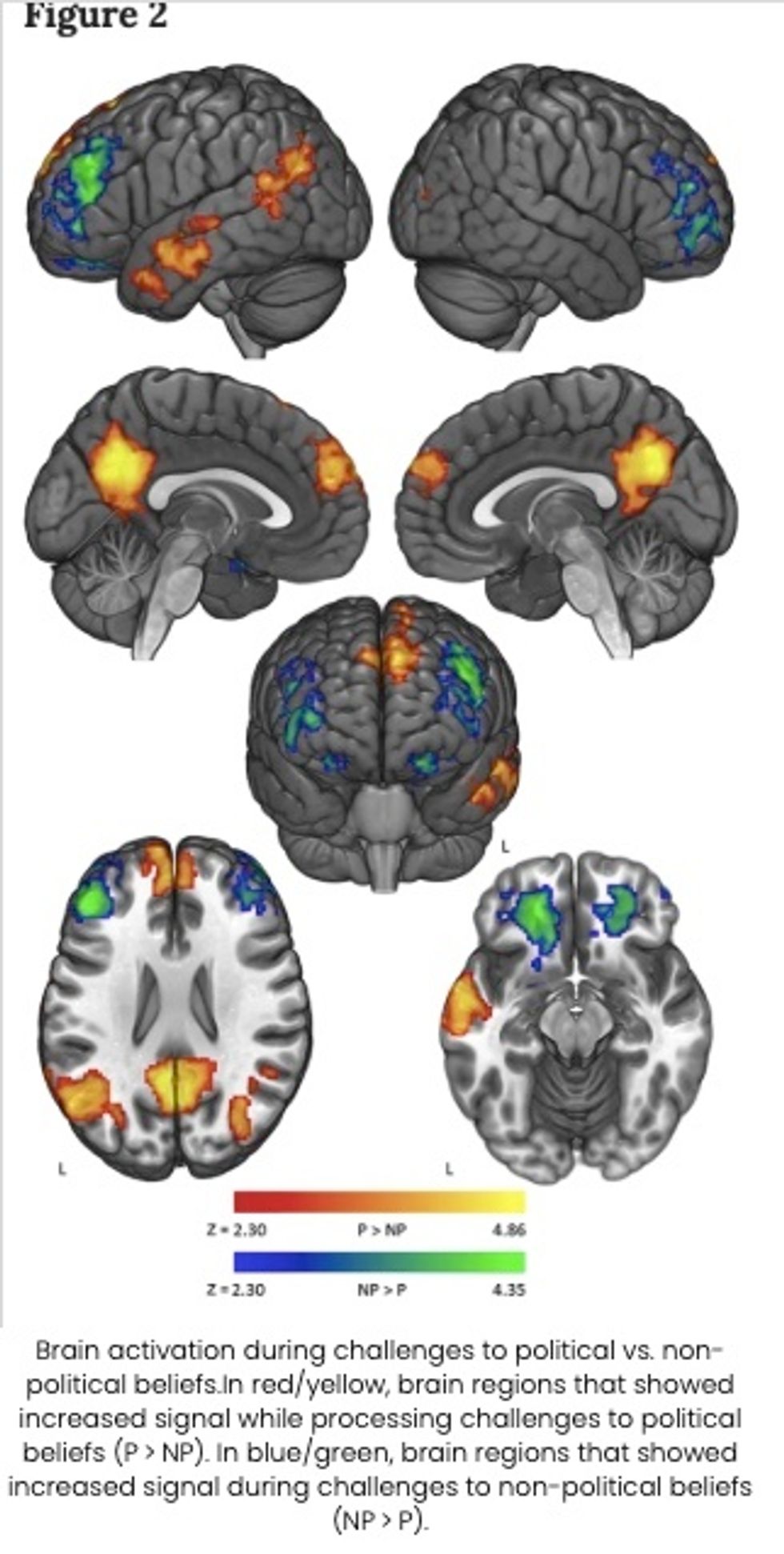 Resisting challenges to political beliefs was associated with increased activity in brain regions involved in contemplating identity and internally-focused cognition.

These brain structures also signaled threats to deeply held beliefs in the same way they might signal threats to physical safety.

The function of the brain regions associated with challenges to non-political beliefs related to adjusting learned associations that may be important for the process of changing one's beliefs in response to counter-evidence.

Essentially, the study found that the way we approach challenges to our political views is extremely personal.

Kaplan explains, "We think it's because political beliefs are important to our identity, to our sense of who we are. They are part of our social selves as well and can define who we spend time with and how they relate to us...When the brain considers something to be part of itself, whether it's a body part or a belief, then it protects it in the same way."

It is not only difficult to change people's minds about their political beliefs but people often feel like their personal identity is being threatened and so often respond with emotion and resistance. Instead of looking outward and listening to other perspectives, we immediately disengage from reality and search inward for the best rebuttal.

When confronted with counter-evidence, we naturally experience negative emotions as a result of the conflict between the perceived importance of the existing beliefs and the uncertainty of the new information.

The study specifically details, "In an effort to reduce these negative emotions, people may begin to think in ways that minimize the impact of the challenging evidence: discounting its source, forming counterarguments, socially validating their original attitude, or selectively avoiding the new information."

So, what does all of this have to do with independent voters?

The very idea that you must "choose a side" in order to have a valid opinion is problematic to our democracy because there is really not one single correct answer on any one issue.

Our world is far more colorful than the black or white picture the two major parties paint.

Refusing to join a party does not mean that independent voters "can't make up their minds" but rather, would like to come to their own conclusions without having a party agenda breathing down their necks.

Truthfully, it can be challenging to not bring emotions into politics, especially on topics such as immigration and abortion that affect the lives of people in a very real way.

As human beings, we all have our biases and as Kaplan's study pointed out, we often feel undeniably threatened when some of our closely held beliefs are called into question.

However, being an independent voter does remove much of the pressure of party loyalty. I have found that it is much easier to be angry and place blind blame on one side or the other when overly invested in the black or white narrative the two major parties and mass media often promote.

Being a stringent "die-hard" of anything can almost never be a good thing and if more voters took the time to consider that there are more than two sides to every issue, our democracy would be all the better for it.