This is the third of four parts in an exclusive weekly series of articles in The Fulcrum by J.H. Snider on Alaska’s 2022 periodic constitutional convention referendum. Part I describes the spending spree over the referendum. Part II proposes a deterrence theory to help explain the extraordinary amount the no side spent. Part III describes the failure of the referendum’s marketplace for campaign finance disclosures. Part IV provides recommended reforms to fix this broken marketplace.

Alaska’s constitutional convention spending spree illustrates the failure of America’s one-size-fits-all campaign finance legal regime for ballot measures, which is based on disclosure. Let us call the current regime “The Marketplace of Ideas Regime” or MOIR, for short. MOIR’s premise is that there is a viable marketplace of ideas so that disclosure of campaign contributors will meaningfully rein in the harmful democratic effects of entrenched economic power.

In recent decades, the track record of convention referendums illustrates that, as in Alaska, campaign finance disclosure for convention referendums may suffer from extreme, systemic collective action problems leading to MOIR failure. On the one hand, bipartisan groups of America’s most powerful special interest groups in conjunction with state legislatures can form a cartel to preserve their veto power over constitutional reforms. On the other hand, those seeking democratic reforms that are popular but the legislature won’t pass appear to suffer from severe collective action problems.

The Normative Framework Endorsed by Defend Our Democracy

Defend Our Constitution alleged that special, out-of-state, and dark money interests would have excessive influence over the convention process, including its second and third stages: the election of convention delegates, and the public’s voting up or down each convention-proposed constitutional amendment. For example, its website FAQ stated: “A convention would bring an unprecedented amount of outside special interest groups and dark money to change Alaska’s laws to promote their own agendas.” With more chutzpah, one of its debaters wrote: “outside interests are pouring millions in unlimited dark money into an effort to turn Alaska into a civic guinea pig. They want to shred and rewrite Alaska’s founding document and start over again with a boot on the neck of your personal privacy, natural resources, Permanent Fund dividend, schools, the judiciary, civil rights and liberties.” Dozens of social media posts focused on the special interest danger, including: 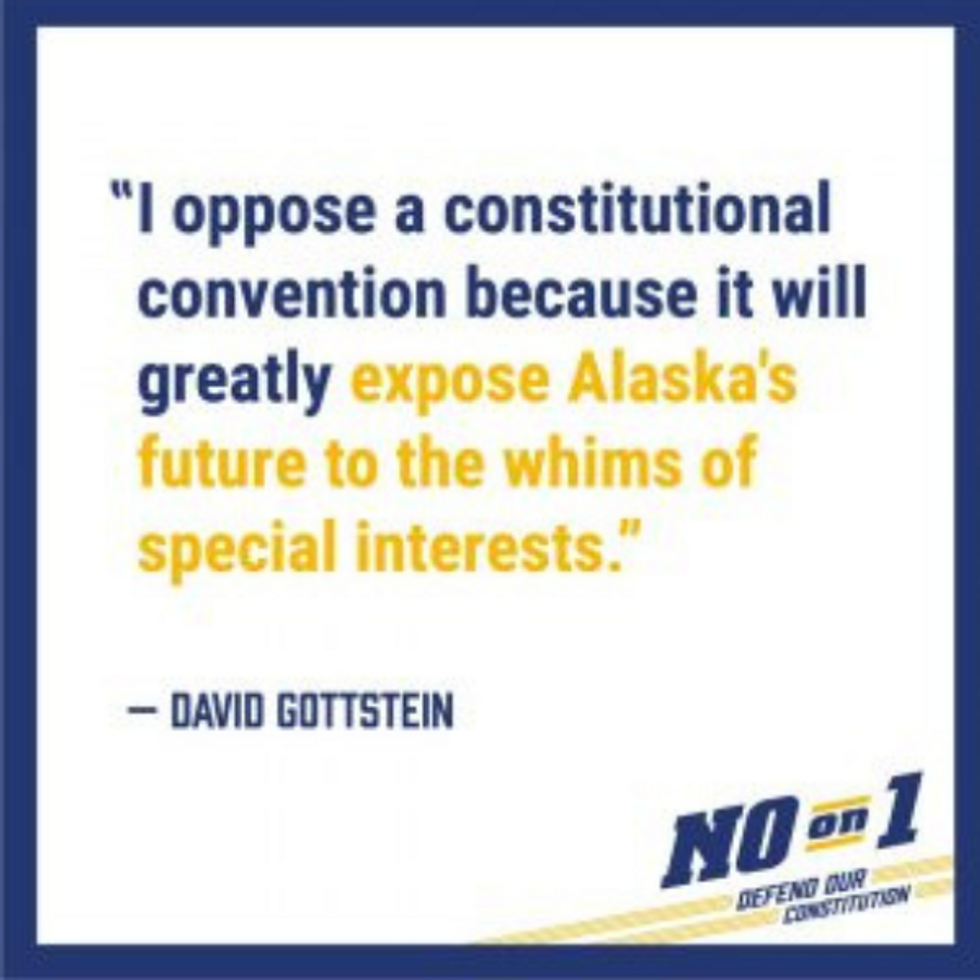 Defend Our Constitution used such arguments to attack the convention process because disproportionate influence by any interest group is politically unpopular, as it violates the core democratic principle of political equality. Indeed, the democratic rationale for campaign finance disclosure is to alert the public to such disproportionate influence. Accordingly, Defend Our Constitution never promoted its own group contributors and fundraising advantage in its advertising and free media campaigns. Nor did it explain why, if a convention would be so helpful to such groups, ConventionYes!, unlike Defend Our Constitution, failed to receive money from them. Nor did it publicize ConventionYes!’s funding sources, presumably because ConventionYes! only received funding from individuals in relatively small amounts--a much more popular type of funding than what it received.

Defend Our Constitution’s arguments were hypocritical. But that’s not an objection to MOIR theory, which only requires that ConventionYes! have an incentive to counter the Defend Our Constitution information. Since ConventionYes! had virtually no money for paid advertising, this meant that it would have to rely on free media to publicize these campaign finance disclosures. But the mainstream media had other priorities.

Coverage by the Anchorage Daily News

ADN’s editorial page strongly opposed calling a convention. In January 2022, it briefly ridiculed the idea, then in late October 2022 ridiculed the idea again, mimicking Defend Our Constitution’s talking points. On its op-ed pages, it ran ten op-eds opposed and three for, with its first eight op-eds all opposed despite multiple yes submissions and many of the no op-eds highly repetitious. For letters-to-the-editor, it ran seventeen opposed and four in favor.

Most visible and thus presumably influential was ADN’s news coverage. It ran nine news articles on the referendum. Only one mentioned—and only in passing—the expensive ads the no campaign was running in Alaskan media outlets, including ADN. Four of the articles covered the total amounts raised respectively by the no and yes campaigns. But no serious attempt was made to explain in terms of widespread democratic norms why the campaign finance disclosures might be of material significance to the public.

ADN’s first article praised the no campaign as “well established and well funded” in comparison to the yes campaign while also burying the campaign finance disclosures at the bottom of a long article. Its second noted the flood of outside money but then quoted the no campaign spokesman as saying the risk of outside money would be even greater for a convention, as Alaska could be turned into “a playground for outside groups.” Its third ran the disclosure numbers in the middle of a long article. Its last, which ran 12 days before the election and thus missed about half the final expenditures and contributions, opened with the campaign finance disclosures but then suggested that despite the large discrepancy in amount raised by the yes and no campaigns, the amounts involved were actually small: “Overall spending on the campaigns has been notably sparse compared to ballot initiatives in prior election cycles. And the convention debate has been somewhat drowned out, partly by the millions of dollars being spent on other high-profile state races in Alaska this year.”

ADN’s pattern of issue-based coverage established early on didn’t substantially change after the campaign finance numbers became available. One factor that may have affected ADN’s coverage was advertising, as it’s well-known that local newspapers dislike alienating major advertisers. Defend Our Constitution was a substantial advertiser whereas ConventionYes! had essentially no paid media budget. Similarly, the local Chamber of Commerce, whose members are ADN’s most important local advertisers, opposed calling a convention. Another factor may have been the sources on their regular beat that political reporters rely upon for efficient news gathering. These elite sources may have had a shared interest, regardless of party affiliation, in opposing a convention. When reporters early on asked them what a convention was about, it was in their interest to cast a convention’s agenda and supporters as extremists and unpopular.

We should view with outrage, not sad resignation, our current campaign finance system that rigs our constitutional democracy’s system of initiating higher lawmaking.

J.H. Snider, the president of iSolon.org, is the editor of The State Constitutional Convention Clearinghouse, which provides summary information about the 14 U.S. states with a periodic constitutional convention referendum. He also edits separate websites, such as The Alaska State Constitutional Convention Clearinghouse, for each state that has a convention referendum on its ballot. Snider has a PhD in American Government from Northwestern University and been a fellow at the Harvard Kennedy School of Government, the American Political Science Association, and New America.

From Your Site Articles
alaska