A lawsuit filed this week over Illinois' new legislative district lines is a preview of what's sure to be a litigious and tense second half of the year for mapmakers.

While Illinois has made more progress than most states, the redistricting process in the Prairie State is far from over. Full census data has not yet been released due to delays caused by the Covid-19 pandemic. As a result, many states are facing impossible redistricting deadlines — some of them constitutionally mandated. If adjustments aren't made soon, courts will have to step in and draw temporary maps for upcoming elections.

Late last week, Gov. J.B. Pritzker signed legislation to establish new lines for the legislative districts in Illinois, a process the state Constitution requires to be completed by the end of this month. (The state still needs to draw new congressional maps.) Because Democrats have a 73-45 majority in the House and a 41-18 majority in the Senate, they were able to quickly draw districts and get Pritzker's approval without any input from Republicans.

By forgoing the official Census Bureau counts in favor of population estimates, "the Plan ensures that historically undercounted minority communities will continue to be underrepresented and lose their right to an equal vote in the legislature," the lawsuit states.

The GOP leaders want a judge to declare the redistricting plan unconstitutional and to require the Legislature to establish a bipartisan commission to draw new maps.

Redistricting has historically been a heavily litigated issue due to partisan disputes like this. But there will likely be even more challenges this time around thanks to the Supreme Court's recent landmark decision. In 2019, the five conservative justices ruled that determining whether there is a constitutional limit to partisan gerrymandering fell outside the purview of federal judges. As a result, many election maps are expected to be battled out in state courts this year.

The added time constraints this year won't help matters either. If states fail to meet certain mapmaking deadlines, the line-drawing will be left to the courts. The Census Bureau intends to begin releasing the data that states need to kick off the redistricting process on Aug. 16. Then the final set of data will be made available at the end of September — much later than a typical redistricting year.

The Census Bureau released its first set of data at the end of April, providing population estimates for congressional apportionment. Due to population growth, Texas gained two House seats, and another five states gained one seat each: Colorado, Florida, Montana, North Carolina and Oregon. Seven states saw population declines resulting in the loss of one House seat each: California, Illinois, Michigan, New York, Ohio, Pennsylvania and West Virginia. The remaining states did not see a change in their number of seats, but all states with more than one district can redraw the lines.

While Illinois opted to use the population estimates already available to draw its legislative maps, most states will have to wait until more detailed data is released later this year. A delayed start could conflict with statutory deadlines set by state constitutions. 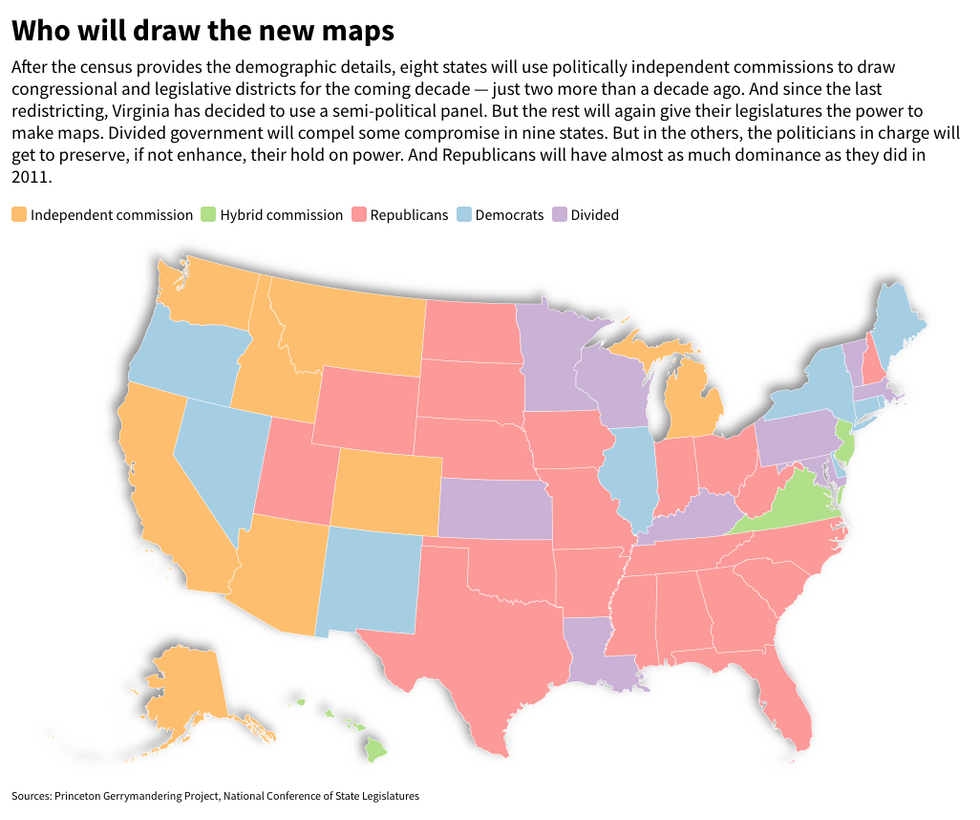 The Brennan Center for Justice, a liberal public policy institute at New York University Law School, released a report in April analyzing how census delays could impact states' redistricting plans. The Princeton Gerrymandering Project also created a tool to track how the delays are affecting states and where urgent intervention is needed most.

Hawaii and Michigan, two states with redistricting commissions, are among the most severe cases identified by both the Brennan Center and the Princeton Gerrymandering Project because they have fixed dates for redistricting.

Hawaii's constitution states that its redistricting commission has 150 days from its first meeting — which this year was April 13 — to finalize election maps. However, that deadline will be impossible to meet given the data delays. State lawmakers have asked the attorney general to petition the Hawaii Supreme Court, requesting forgiveness for missed deadlines.

Similarly, Michigan's inaugural independent redistricting commission and Secretary of State Jocelyn Benson have asked the state Supreme Court to extend the deadline by which election maps need to be finalized.

Most states have relatively flexible redistricting timelines, though, because either the dates are tied to the release of census data, the deadlines are in 2022 or they have no set deadlines. However, these states will still most likely need to hold special sessions to finalize election maps in a timely manner.