Trump takes back openness to helping USPS as House steps in

President Trump on Monday dismissed the Democratic congressional push to prop up the Postal Service as a "con game" and rebuffed the notion he is out to undermine the reliability of the mail ahead of an election counting on mail service as never before.

His comments sowed fresh confusion about whether he will agree to the cash infusion USPS says it needs to assure the timely delivery and return of tens of millions of ballot envelopes this fall. At the same time, he signaled support for cuts the post office has made this summer, which are prompting the House to return to Washington in a few days to pass legislation countermanding those moves.

"It's been run horribly. And we're going to make it good," Trump said on "Fox and Friends." "Now what am I supposed to do? Let it continue to run badly? So if you fix it, they say, 'Oh he's tampering with the election.' No, we're not tampering."

The president's latest comments underscore how there looks to be no easy or quick end to the fight over the Postal Service's capacity to fulfill its vital role in the democratic process this year. Democrats say Trump is out to sabotage the agency to sow doubt about the reliability of an election where he's now the underdog. The president insists he's out to prevent massive election cheating, which almost no one outside his orbit suspects.

Democrats have advocated giving $25 billion to USPS in the next legislative package to prop up the economy during the coronavirus pandemic, but before negotiations broke down last week they had tentatively agreed to $10 billion. (This is separate from the $3.5 billion the states requested to help them conduct a presidential election made much more complex by the pandemic.)

Trump himself on Saturday, and his chief of staff Mark Meadows on Sunday, expressed a willingness to provide additional funds to the USPS, maybe even in a bill separate from the stalled stimulus package. But the president on Monday dismissed those figures as politically motivated.

"This is a con game" by Speaker Nancy Pelosi and Senate Minority Leader Chuck Schumer, Trump said, claiming without evidence that what they want is to pump federal money into only the blue states.

USPS sent letters at the end of July warning election officials in 40 states — including every potential presidential battleground — that their deadlines for requesting and returning absentee ballots were "incongruous" with the current state of mail service and that voters who act close to the cutoffs risk being disenfranchised. Six states and the District of Columbia received narrower warnings in part because their election procedures aren't finished, according to a comprehensive roster of the letters obtained by The Washington Post. Oregon, Nevada, New Mexico and Rhode Island did not get the warnings, apparently because the Postal Service doesn't feel stressed by their timetables.

Trump has been claiming for six months, without evidence, that remote voting routinely leads to massive fraud. He has sought to narrow that assertion in recent weeks, focusing his contempt on the small number of states — which have grown from five to 11 this year in response to the pandemic — that will proactively seek to deliver ballots to all the voters on their rolls this fall.

Meadows said the administration was willing to negotiate a USPS bailout separately in order to preserve the franchise for those who people who ask for and then receive an absentee ballot — including the president, who applied in Florida last week to vote for his own re-election that way, and millions of seniors, who not only have the highest turnout rates and tend to vote Republican but also are the group at the biggest risk for serious Covid-19 complications.

A potential bill to provide that money is not why Pelosi told House members on Sunday that they needed to return to the Capitol to vote on legislation, probably Saturday. Instead, the measure will order the Postal Service to return to the level of service it was maintaining at the start of the year.

In the name of stemming the longstanding flow of red ink at the post office, which has intensified during the pandemic, DeJoy had ordered cutbacks this summer including ending most overtime for postal workers, restrictions on delivery timetables and some shutdowns of mail-processing equipment. The removal of thousands of mailboxes was also underway, but over the weekend USPS announced a halt to that effort until after the election following complaints from customers and members of Congress.

"The postmaster general and top Postal Service leadership must answer to the Congress and the American people as to why they are pushing these dangerous new policies that threaten to silence the voices of millions, just months before the election," the Democrats said in announcing the new hearing date.

The hearing was moved up from the middle of September to the first day of the GOP convention. And a House vote this weekend will allow Democrats to highlight the issue right after the end of their nominating convention. But Majority Leader Mitch McConnell, a Republican, has sent senators home for a summer recess lasting until after Labor Day.

"What you are witnessing is a president of the United States who is doing everything he can to suppress the vote, make it harder for people to engage in mail-in balloting at a time when people will be putting their lives on the line by having to go out to a polling station and vote," said Sen. Bernie Sanders, the marquee speaker Monday night at a convention being held almost entirely virtually.

Sanders appeared on most of the Sunday TV news interview shows, while Meadows confined himself to CNN. "I'll give you that guarantee right now: The president of the United States is not going to interfere with anybody casting their vote in a legitimate way, whether it's the post office or anything else," he said.

The Postal Service is the country's most popular government agency, with 91 percent of Americans professing a favorable opinion in an April poll by the Pew Research Center.

Claim: Mail-in ballots can be sent to the wrong address. Fact check: False 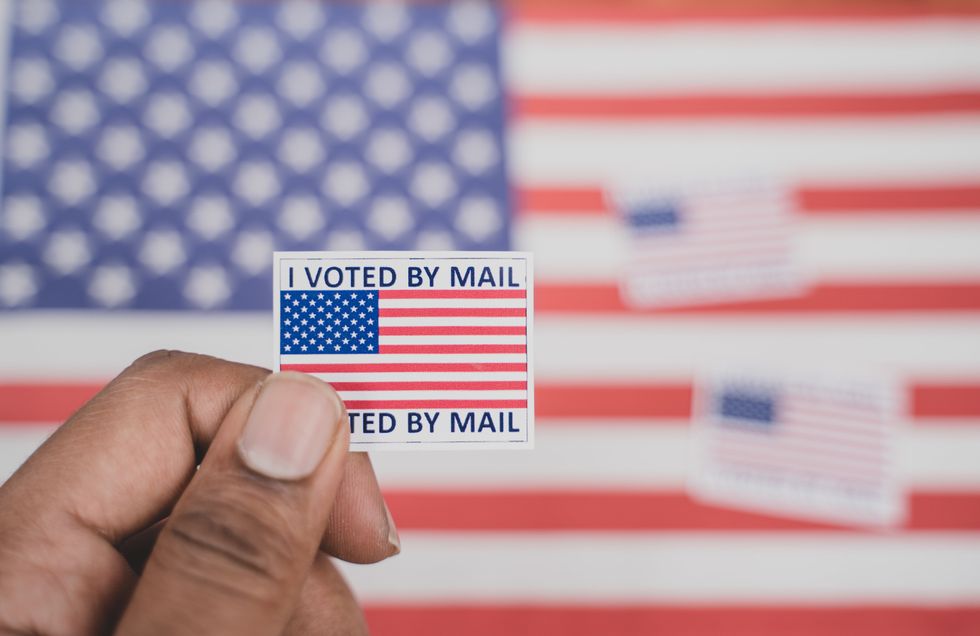 Absentee voting refers to when a voter requests a ballot for an election and is then sent one in the mail. Vote-by-mail, which is what Sen. Tom Cotton is most likely referring to as "mass mail-in voting," is a system of sending every registered voter (an important distinction from "everyone") a ballot without a request. Prior to the Covid-19 pandemic, Colorado, Hawaii, Utah, Washington and Oregon were already vote-by-mail states. But now California, Nevada and Vermont will also automatically send ballots to registered voters, while still having in-person options.

These vote-by-mail states usually have the cleanest voter files because they interact with voters so regularly, according to Audrey Kline, the national policy director at the National Vote at Home Institute. Even if a ballot gets sent to the wrong address, it's most likely due to voter inaction rather than fraud.

"It's not like my ballot is going to end up in another city randomly," she wrote in an email. "Errors usually center around people not updating their voter registration before a ballot is mailed. So if you move and don't tell your clerk, you ballot could arrive at your old address. This in and of itself isn't usually a huge issue — they are non-forwardable and get sent back to the clerk." If someone does gets the wrong ballot mailed to them and then tries to impersonate that voter, that fraud is detectable by signature matching and other security policies.

"The fact is that mail ballot fraud on the scale that people are warning of is just not practical or economical," Kline said. "People say 'ripe for fraud' because nobody has figured out how to do it on a large scale, but they think it's still possible and are trying to keep the argument alive."

How to achieve objectives of critical race theory without the controversy

Can you spot the gerrymandered congressional district?