Election workers in Detroit process absentee ballots during the 2020 election.

Rhode Island is on the verge of allowing any voter to use an absentee ballot without providing a specific reason. If Gov. Daniel McKee signs the bill, just 16 states will require would-be absentee voters to provide an excuse.

Currently, 25 states and the District of Columbia allow no-excuse absentee balloting, and an additional six have all-mail voting.

Proponents of universal absentee voting say such systems make it easier for more people to vote, particularly minorities, those who live in rural areas and people with disabilities. Advocates also claim that safeguards built into the system ensure mail voting is as secure as in-person balloting.

Opponents of no-excuse mail balloting believe it increases the risk of voter fraud and is an unreliable method of voting because ballots can become lost and the system introduces the possibility of errors such as mismatched signatures.

In states that require excuses, common options include illness, absence from the voting jurisdiction, disability and being a caregiver.

Amidst a raging pandemic, voting by mail surged in 2020 with a number of states loosening the rules, at least temporarily. That year, 46 percent of voters cast their ballot by mail; never before had even a quarter of voters used that method. 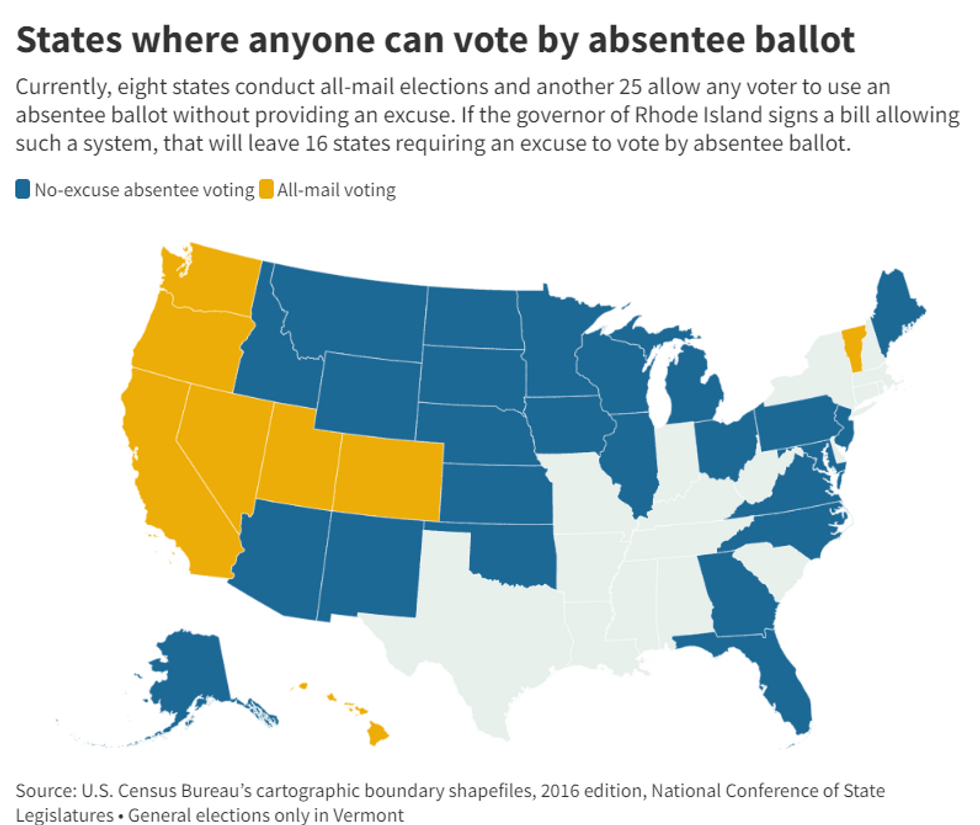 Even as mail voting has expanded, voters in New York strongly rejected a ballot proposal last year that would have instituted a no-excuse system. The result was unexpected as liberal-leaning states have embraced the concept more than conservative states.

Other states in the Northeast have debated similar proposals since the 2020 election.

Connecticut lawmakers have considered allowing a people to vote on a constitutional amendment that would permit no-excuse absentee ballots but have not been able to muster enough votes to advance the proposal.

In March 2021, Republicans in the New Hampshire legislature defeated a bill that would have established people to vote by mail with not excuse.

From Your Site Articles
Related Articles Around the Web
absentee ballot