Why are kids today less patriotic?

"When it comes to the flag as a symbol, a public opinion poll conducted by the Foundation for Liberty and American Greatness suggests that young people see the flag less as a symbol to be proud of and more as a symbol of what is wrong with the country," writes Jane Lo.

Lo is an assistant professor of education at Florida State University.

The Conversation, which publishes online pieces by academics and researchers, answers questions from young people at CuriousKidsUS@theconversation.com.

Kim. D., a 17-year old from Goochland, VA asked: Why are younger people not really patriotic like me? Why do kids these days not realize why they stand for the flag or the Pledge of Allegiance or the national anthem?

The first bell of the day rings at a local school, and a voice blares over the intercom, asking students to rise from their seats and say the Pledge of Allegiance to the flag of the United States of America.

This is a familiar practice to students across the United States, since most states currently require schools to recite the pledge at the beginning of each day. And yet, some students opt out of the ritual, choosing instead to remain seated, or stand but stay silent.

Are these students less patriotic than those who stand willingly and proudly to recite the pledge? As someone who studies how young people engage with politics, I think the answer may be a bit more complex than you think.

Some studies suggest that the answer is yes, that young people tend to view the country more negatively than older generations, or that younger generations tend to be less proud of the United States.

These studies often ask young people how satisfied they are with where the country is or where it is going. Younger generations – millennials, born between 1981 and 1996; and Generation Z, those born after 1996 – tend to be less satisfied with the current state of affairs and less proud to be American. 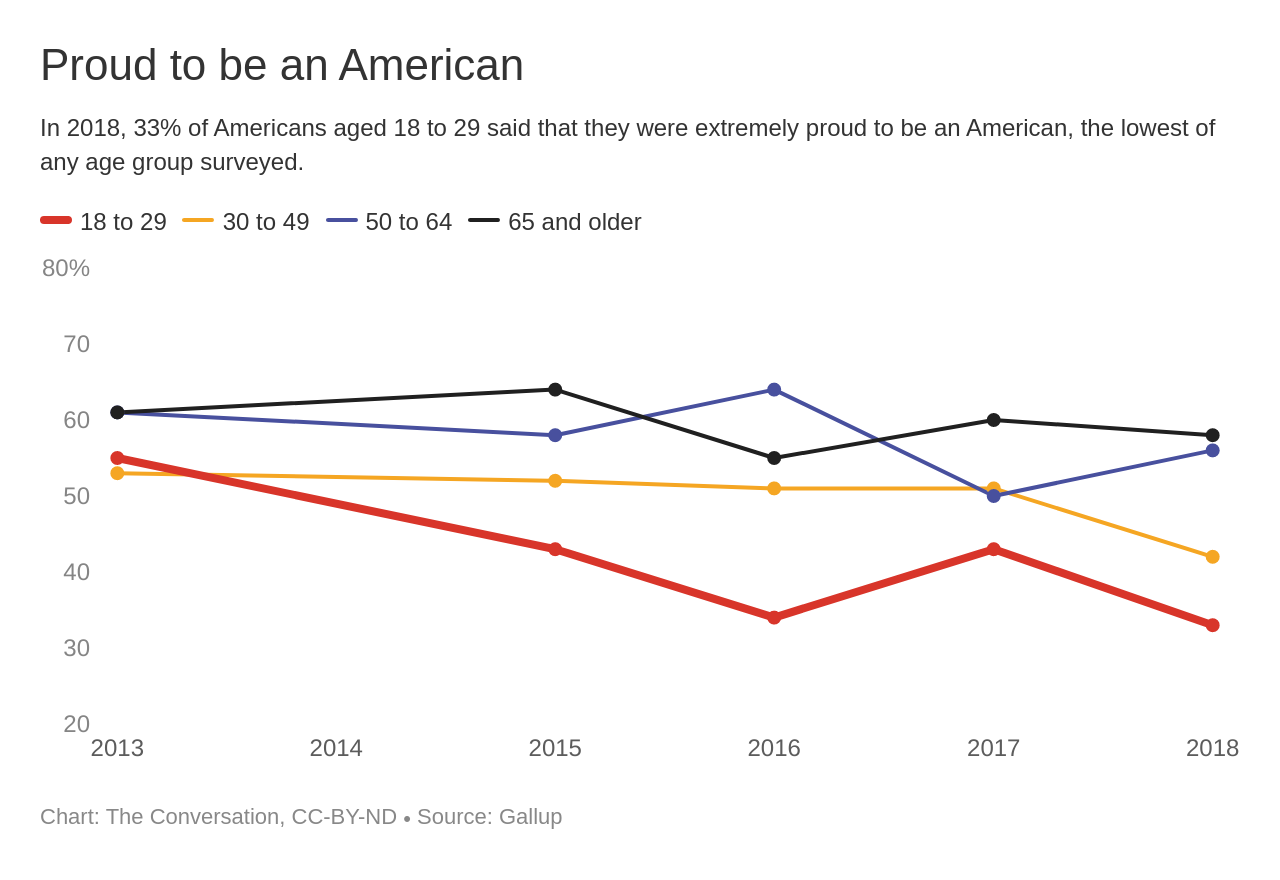 However, this dissatisfaction or lack of pride does not necessarily mean that young people are less patriotic; instead, it may point to a shift in what matters to young people and what they perceive as patriotism.

For example, a Market Research Foundation survey found that younger generations still care about the well-being of the United States and policies related to the country's stability, even though they may not associate it with patriotism.

And a Center for Information and Research on Civic Learning and Engagement study shows that young voters are showing up more for midterm elections, which suggests that they care more about the future of the country than young generations of the past.

Furthermore, they seem to be more engaged with politics now than in the recent past, even if they are less committed to particular political parties.

When it comes to the flag as a symbol, a public opinion poll conducted by the Foundation for Liberty and American Greatness suggests that young people see the flag less as a symbol to be proud of and more as a symbol of what is wrong with the country. If more students are associating the flag with flaws in the system, it would explain why some students opt out of standing for the pledge of allegiance or other celebratory acts.

My own work on a project-based high school government course shows that school coursework can help students figure out how to engage with democracy in ways that make sense to them. This means that, even as students report feeling less patriotic about the current system, they are engaging with it in an effort to change it for the better.

In the end, it's too simplistic to say that young people who are dissatisfied with the U.S. at present aren't patriotic. It's likely that the very students who are refusing to stand for the pledge are exhibiting their patriotism by demanding a better tomorrow, as was seen in the student protest movements of the 1960s and other current student-led protests.

This might provide all Americans with some hope, since it means young people actually care about the future state of affairs. It may also signal it is time to work together to build a country that we can all celebrate.

We are all junkies

We are all junkies