Democrats have a slight edge in Colorado, while the GOP may flip Maine

This is the fourth in a four-part series examining possible outcomes of state legislative elections in 2022 and their potential impact on policy-making.

As Congress has become mired in gridlock, passing few meaningful bills each year, state governments have become home to most consequential legislative activity. That makes the 2022 midterm elections critical for anyone concerned about a myriad of issues, including reproductive rights and elections.

This final installment examines likely outcomes in Colorado and Maine, and what they mean for constituents and the country as a whole. In both chambers in Colorado, Democrats currently have control and are likely to maintain it, though Republicans have a chance to flip. Democrats also hold majorities in Maine, though they are much more tenuous. Democrats are slightly more likely to maintain control of the Senate, while in the House of Representatives, Republicans may have a slight edge.

For this series, the Fulcrum utilized ratings from Cnalysis and Sabato’s Crystal Ball to identify the most competitive legislative bodies. Ballotpedia data on election trends addresses the historic tendency for the president’s party to lose state legislative seats in the midterms, while Campaign Legal Center redistricting data explores possible advantages one party may have over the other. 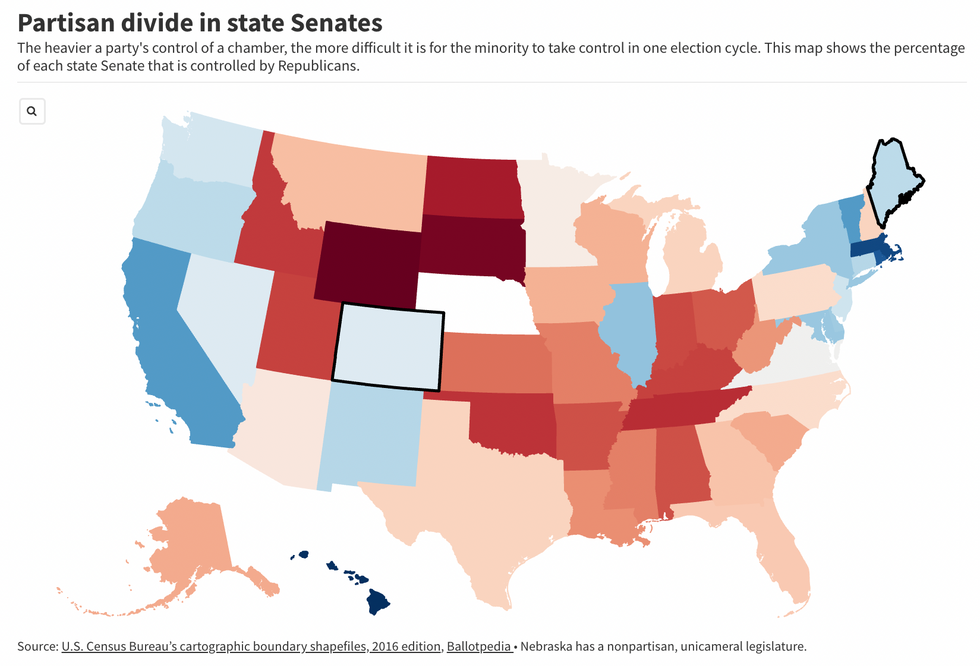 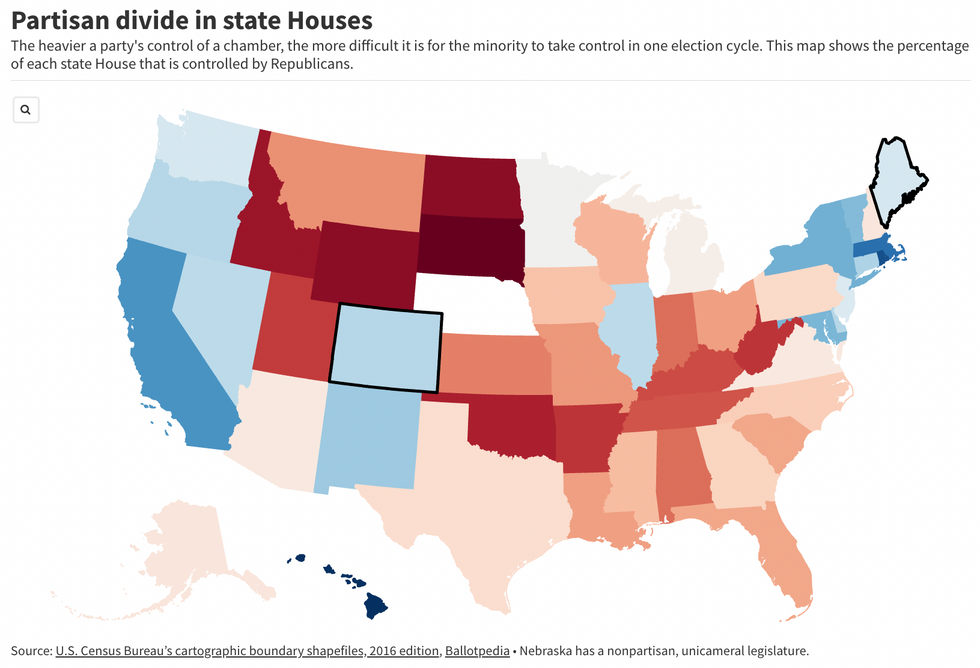 The Colorado General Assembly includes the 35-member State Senate and the 65-member House of Representatives. Currently, both these chambers are held by Democrats, as well as the governor’s seat. In fact, Democrats have had trifecta control for 10 of the last 20 years, while Republicans have not controlled all three branches since 2004. Still, Republicans have a chance to flip at least one state legislative chamber this fall.

The Colorado Senate is rated Lean D by Cnalysis. At the district level, only five of the 35 seats are competitive — 42 percent of districts are solidly Democrat, while 40 percent will almost certainly go to Republicans. GOP candidates would need to win one district that leans in their favor, one toss-up, and two districts that lean Democratic to flip this legislative body.

Sabato’s Crystal Ball also rates the Senate Lean D. It emphasizes that the Senate is the more likely chamber to flip, and cites redistricting changes as one reason why Republicans may make gains. Sabato’s points out that Republicans will face an uphill battle, particularly if extremely right wing candidates are on the ballot.

The likelihood of Republican gains is buoyed by the Senate’s midterm trends, which mirror those of the nation. In 2010 and 2014, with Obama in the White House, Democrats lost seats in the state Senate, even losing their majority from 2014 to 2018. However, with Trump in the Oval Office in 2018, the Democrats gained their majority back. It is likely that this pattern will hold and Colorado Democrats will lose seats in November, though not necessarily their majority.

Where control of state legislatures is up for grabs

The Colorado House of Representatives also receives a Lean D rating from Cnalysis. Forty-nine percent of the districts will almost certainly go to Democrats, and only 30 percent are solidly in the Republican camp, leaving Republicans to fight an uphill battle in this chamber. They need to win the four seats that lean their way, both tossups and the three districts that lean towards Democrats to flip the House.

Accordingly, Sabato’s Crystal Ball rates the Colorado House Likely D, finding a Republican flip in this chamber unlikely. It believes that the GOP can gain some seats, buoyed by redistricting changes, even if they don’t manage to flip the chamber.

Democrats have held the majority in the Colorado House since 2004, with the exception of the 2010 midterms when the Republicans briefly flipped this legislative body. The House does not follow midterm trends as closely as the Senate because, though Democrats lost seats in the 2010 and 2014 midterms, Republicans did not lose any in 2018 as would be expected.

The 2020 redistricting cycle will likely have a considerable effect on these elections. The last set of maps was drawn by Democrats. The previous Senate map was well balanced, skewing slightly Republican, while the previous House map was skewed significantly towards Democrats, according to the Campaign Legal Center.The new maps, approved by the Colorado Supreme Court in Nov. 2021, were drawn by the state’s Independent Legislative Redistricting Committee, after Colorado passed constitutional amendments in 2018 to require non-politician commissions for redistricting. This means that Democrats will likely lose some of the advantages they have enjoyed in the House.

If Democrats maintain their control of both legislative chambers, it is almost certain that they will continue their trifecta power in the state. Democratic Gov. Jared Polis, elected in 2018, has a high approval rating and is favored to beat out moderate Republican Heidi Ganahl and secure his reelection. If Republicans flip the House or Senate, however, it will become much more difficult for Democrats to pass their legislative agenda.

In recent years, Colorado has passed several bills expanding voter access in their vote-by-mail state. These include allowing voters with disabilities to cast ballots electronically, allowing people with felony convictions to regain the right to vote upon their release from prison and allowing voters to maintain their voter registration status even if their home is destroyed. National trends indicate that, with control of the Senate or House, Colorado Republicans would move to block legislation expanding voter access.

Additionally, Colorado Republicans oppose the right to abortion, as expressed in the official Colorado GOP party platform. Abortion has been codified in state law, and will remain protected unless Colorado Republicans win both houses and the governor’s seat. Colorado has also passed gun control legislation recently, including a red flag law and universal background checks, which Republicans may attempt to repeal with greater legislative control.

Maine’s Legislature consists of 35 members in the Senate and 151 in the House of Representatives. Both houses are currently under Democratic control, as is the governor’s seat, and Maine Democrats have been in power since 2018. However, the Democratic majorities in both houses and the governor's seat are considered some of the most vulnerable to Republican gains this year.

Sabato’s Crystal Ball rates the Maine Senate as one of only four tossup chambers and thinks it’s more likely to flip than the House. Increased Republican turnout to support gubernatorial candidate and former governor Paul LePage may result in more votes for the state legislative GOP candidates.

While its rating for this chamber echoes the fact that it will be a close race, Cnalysis thinks the Democrats are more likely to come out on top with a Tilt D rating. Forty percent of the districts are solidly in the Democratic camp, while 35 percent will almost certainly go to Republicans. This leaves a whopping 25 percent that could go either way. Of these, Republicans would need all five toss-ups, as well as one of the four districts that lean Democratic, to flip the Senate.

Another factor increasing the probability of Republican gains is that Maine’s Senate is very vulnerable to national partisan election trends. Since 2008, in midterm elections, the president’s party has invariably lost their majority in the Senate. In presidential election years, the president’s party has gained a majority. However, the Democrats currently hold two more seats than the Republicans did going into the 2018 election when they lost their majority.

Like the Senate, the House is a tossup according to Sabato’s Crystal Ball, though it thinks a flip here is marginally less likely. Along with increased Republican turnout, Sabato’s also mentions Maine voters’ penchant for split-ticket voting as a reason why one or both chambers may flip, even with a Democratic win for governor.

The House has remained more reliably in Democratic hands in the past 20 years, only flipping during the 2010 midterms before switching back in 2012. Still, Democrats lost seats in 2014 while Republicans did in 2018, showing that midterm trends still do have an effect and at least some Republican gains are likely.

Redistricting is unlikely to have a large impact on these elections. Maine’s maps are drawn by a commission made up of legislators from both chambers and parties. They must be approved by at least two-thirds of the Legislature and are subject to gubernatorial veto. According to the Campaign Legal Center, the previous maps were well balanced. Considering that the new maps, enacted last September, were approved nearly unanimously, with only 10 House Republicans voting against the new House maps, it is likely that they will perform in a similar manner.

In all the states we have analyzed in this series, there is a chance that one or both chambers of the legislature will change partisan control. Maine is the only state where we might see an entire trifecta flip, as both legislative bodies are extremely close and the incumbent Democratic governor is facing a difficult fight. Current polls show Gov. Janet Mills with a slim lead over former Republican Gov. Paul LePage. Mills is struggling to overcome the Democrats’ dipping approval ratings as economic woes fall upon Pine Tree Staters, while LePage has turned off many voters with his Trumpian brash manner.

A Republican trifecta flip would drastically change policy in Maine. In recent years, Democrats have enacted many bills to expand voter access in Maine. These include bills which increased vote-by-mail options, established an online voter registration system, created a ballot notice and cure system and allowed student IDs as valid forms of identification for voter registration. It is likely that, with control, GOP legislators would likely roll back these changes to voting laws. In their platform, they express intent to repeal Maine’s ranked-choice voting and require photo identification to vote.

Social issues are also on the ballot. Abortion was codified in Maine in 1993, but is not enshrined in the state’s constitution, meaning that Republicans could change that law with legislative majorities. In its party platform, the Maine GOP states its opposition to abortion. Additionally, Republicans would likely pass anti-LGBTQ+ bills similar to those passed in Florida and Texas, as they state their opposition to same-sex marriage and discussion of sexuality or gender identity in schools. They are also against discussion of race or “Critical Race Theory'' in schools.

From Your Site Articles
state government

Up to Us
Read More