Stunning early vote totals continue to resonate as we inch closer to Election Day. As of Oct. 23, more than 5 million 18- to 29-year-olds had already voted in the 2020 elections, based on data from Catalist. More than 3 million of those early votes were cast in 14 battleground states.

Of course, the pandemic gives a number of reasons to vote early or by mail, like less social contact. And many states have made mail-in voting easier.

But those factors alone cannot explain the surges we are seeing in at least two states, Texas and Georgia, where the early in-person voting line has been eight hours long at times. There is a huge increase in Colorado, where all registered voters have automatically received mail-in ballots for years. Nothing seems to stop younger voters' determination to choose the leaders they want this year. Youth have been predicted to make a significant impact on the outcome of the election in these swing states. Early vote figures seem to confirm that prediction. 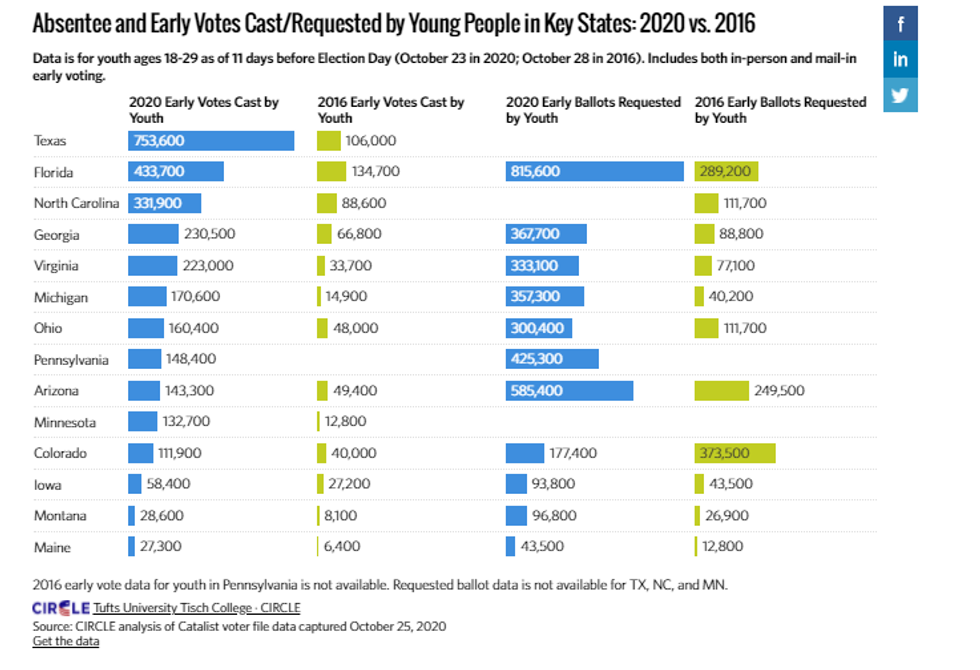 There are other signs that point to a really high youth turnout on Nov. 3. We have seen participation in protests grow from 5 percent to 27 percent among 18- to 24-year-olds from 2016 to 2020. Contrary to a youth stereotype, young people who are on the street protesting for a cause vote more than other young people. Youth engagement with campaigns through donations and volunteering is also higher, as is the number of young people talking to friends about voting and registering them to vote.

Finally, the number of registered youth is already above that of November 2016 in the majority of states we track. At the Center for Information and Research on Civic Learning and Engagement, we will continue to watch the early voting data in the coming days, but I expect this energy surge to continue.

Kei Kawashima-Ginsberg is the director of the Center for Information and Research and Civic Learning and Engagement, part of the Jonathan M. Tisch College of Civic Life at Tufts University. Read more from The Fulcrum's Election Dissection.

From Your Site Articles
Related Articles Around the Web
young voters