Michigan election jokes? One's about a stool pigeon and a plumber. The other involves Trump.

Sometimes, for sanity's sake, you just have to laugh at what is happening in this crazy year of very serious debates over how our elections are going to be conducted.

Maybe these two related stories out of battleground Michigan in the last few days will help — although, be forewarned, one's a bit more overtly humorous than the other.

Barb Byrum, the county clerk in Lansing, announced Friday that she had filed a criminal complaint with the local police and the Ingham County sheriff against John Pavlik of Mason, a town of about 8,500 souls about 15 miles south of the state capital.

His alleged crime: a potentially very unclean if minimal form of election fraud.

Pavlik is a retired plumber and has a lot of toilets around the house. Having followed the ongoing disputes over the propriety of voting absentee, he apparently decided to have a little fun.

So, a week ago Sunday, he placed one of his commodes in front of his house along with a large sign stating, "Place Mail in Ballots Here." 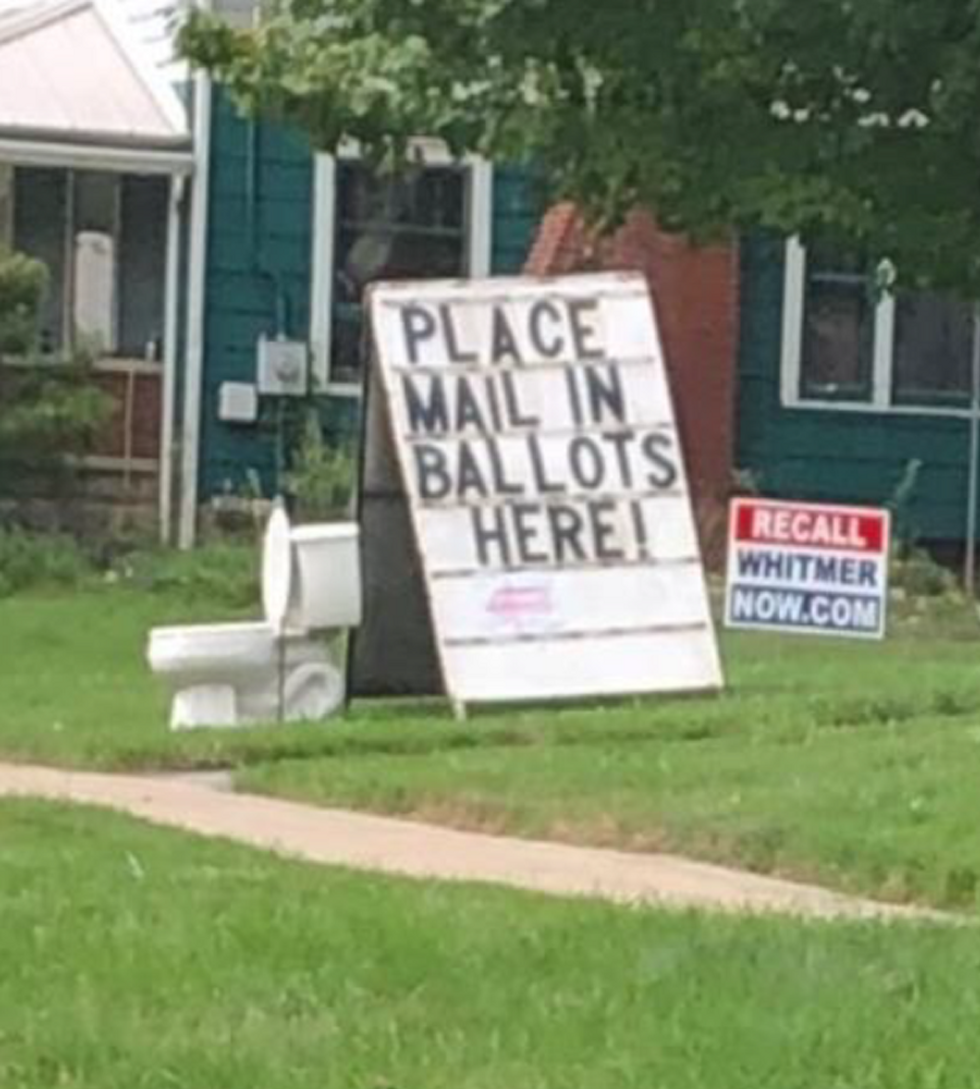 "I thought it would be kind of cute, a little satire to put it out on my front lawn and put the sign on it," he told a local TV station.

Byrum did not appreciate the attempt at humor and contacted the police, who soon showed up at the house to take statements from Pavlik and his wife. By Friday, Byrum, a Democrat with responsibility for a slice of election administration in a tossup state, called for the plumber to be prosecuted.

"Elections in this country are to be taken seriously and there are many people who are voting by mail for the first time," she said. "We need to put out accurate, complete information about voting by mail, which is the safest way to vote during the pandemic. That starts at the top and I worry that the misinformation coming from President Trump is encouraging people to lose faith in the absentee voting process."

She pointed out that it is a felony to take illegal possession of an absentee ballot with a maximum punishment of five years in prison and a $1,000 fine.

The county prosecutor's office has declined to pursue the case but there is no word from the Mason police department.

One little postscript: Byrum is more than prolific on social media, particularly Twitter, where she has posted more than 20,000 tweets, a good number of which highlight her frequent biking and running outings.

She posted this in a tweet on Saturday: "What did one fly say to the other? Is this stool taken?"

Speaking of jokes, remember that knee-slapper in which the president of the United States keeps undermining the integrity of the election — calling the impending record use of mailed ballots a sure-fire path to fraud based on, well, no evidence whatsoever?

It's such a great one that he has tweeted more than 50 times about it since April.

Well, our president, never to be constrained by his previous statements, decided on Monday to change directions — 180 degrees — at least when it comes to a state where he's trailing but counting on voters to give him 16 electoral votes.

He then provided a link just to be helpful. (Early voting in Michigan actually doesn't start until Thursday.)

It was Trump, you may recall, who threatened to withhold funding from Michigan after Democratic Secretary of State Jocelyn Benson mailed absentee ballot applications to every voter before the primary and promised to do it again before the general election.

Last week the state's court of appeals ruled that Benson's actions were legal.

Maybe they were just joking.

From Your Site Articles
Related Articles Around the Web
voter fraud