Some states may consider legislation to expand early in-person voting while others are looking to make such rules more restrictive.

In the aftermath of an election that included dozens of changes to voting laws, states have seen a surge in legislation that could further alter the voting process — or unwind some of the advancements made in response to Covid-19.

The pandemic prompted more Americans than ever to vote by mail last year. Seeing broad success with this and other alternative voting methods, Democrats want to make absentee and early voting both permanent and more widespread. But Republicans want stricter voting rules to protect against fraud — even though no significant allegations were proven true last fall.

A report released Tuesday by the Brennan Center for Justice, a liberal public policy institute at New York University Law School, found that just a month into the new year more than 500 voting rights bills have already been introduced in 37 state legislatures — more than double what had been proposed by this time last year. While a majority of this legislation is aimed at expanding access to the ballot box, more than 100 measures across 28 states would restrict voting access.

Of course, increased volume does not necessarily translate into legislative success. A study of 2013-14 state legislation by CQ StateTrack, which monitors bills in every legislature, found that one-quarter of state-level bills became law. The political leanings of individual states is more predictive than the overall volume. 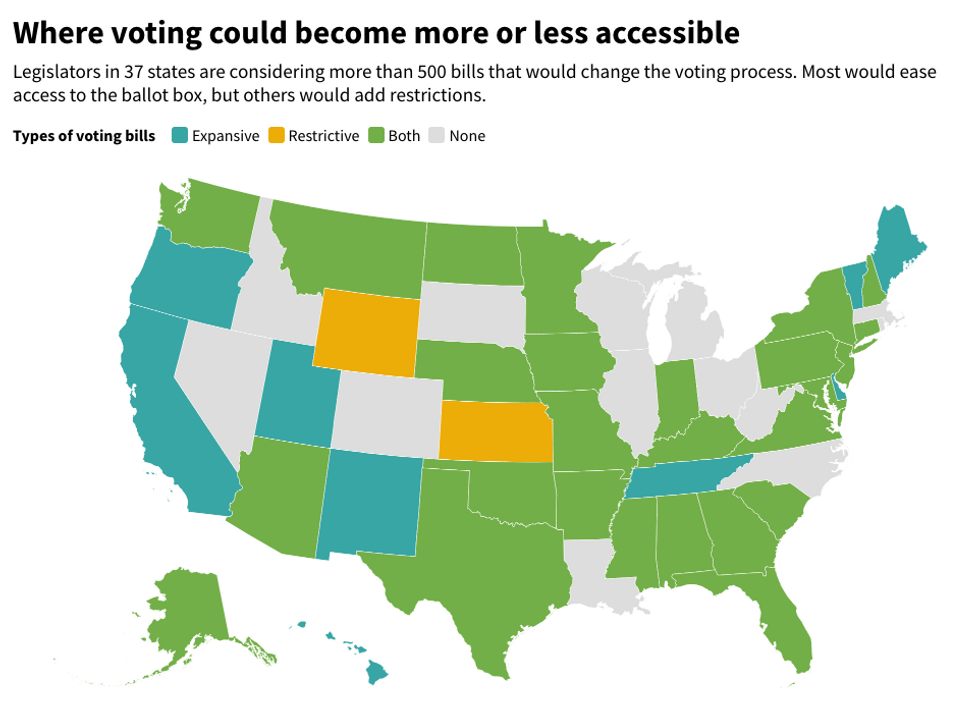 The Brennan Center's analysis found that legislators have introduced three times the number of restrictive voting bills this year. These 106 bills are mostly aimed at limiting mail voting and adding more stringent voting requirements. At this time last year, only 35 such bills had been proposed.

While a lot of these bills won't succeed, in GOP strongholds they could gain serious traction. Missouri, Mississippi and New Hampshire are among the red states considering these types of measures.

In battleground Pennsylvania, lawmakers have introduced 11 different bills that would restrict voting access, the most of any state so far. Three would eliminate the state's recently adopted no-excuse absentee voting policy and another would make it harder to obtain a mail ballot by removing the permanent early voting list.

Ten states have proposals to add new or more strict voter ID requirements for those who wish to vote in person early or on Election Day. And four states are considering doing away with in-person registration on Election Day.

Meanwhile, state lawmakers are also considering many more proposals to make voting easier and more accessible. There are currently more than 400 bills pending in 35 states — more than double the amount introduced at this time last year, according to the Brennan Center's analysis.

These bills are mainly focused on expanding access to mail voting and in-person early voting, bolstering voter registration and fortifying voting rights policies. Democratic-controlled states will try to piggyback on the success of these reforms in the 2020 election and establish more permanent policies moving forward.

Solidly blue New York leads the pack with 56 reform bills introduced so far. Texas is not far behind with 53 such bills, but passing voting reform in the Lone Star State will be much more of an uphill battle.