State by state, electoral reform is happening — but not fast enough

Fisher is deputy director of Unite America, which works to enact and helps finance political reform efforts and candidates "who put people over party." (It is a donor to The Fulcrum.)

Our Unite America Institute has just graded each state on the status of four key electoral reforms: voting at home, independent redistricting commissions, ranked-choice voting and nonpartisan or open primaries. This was our second annual report, and it finds incremental improvements since last summer, as eight states notched higher marks.

Yet nine states still have failing grades. — and another 21 have earned a D. (California leads the country with an A-.)

Only a few states have improved their standing from a year ago.

Within the last year, two states (Virginia and Nevada) established permanent absentee voting lists, which allow voters to voluntarily opt in to a system that automatically mails them a ballot for all future elections. Virginia's reform was complemented by a switch to no-excuse absentee voting and an extension of the deadline to mail ballots. Assembly Bill 345 in Nevada also included provisions expanding poll location options, and allowing for online and same-day registration.

Five states (Alaska, Hawaii, Kansas, Nevada, and Wyoming) earned points, because the Democratic Party in those states used ranked-choice voting for their presidential primaries. By all accounts, the process was a success that allowed voters to share their full preferences and the states also showed an increase in voter participation. Utah picked up a point, as well, with both parties using ranked-choice voting for their state and federal nominating caucuses.

Four cities (Palm Desert, Calif., Easthampton, Mass., Eastpoint, Mich., and New York) also passed measures to adopt ranked-choice voting. In New York alone, where 74 percent of voters said the system should be used for city council and mayoral races, the reform will eventually triple the number of voters using RCV nationwide, and will save the city more than $10 million each election cycle. 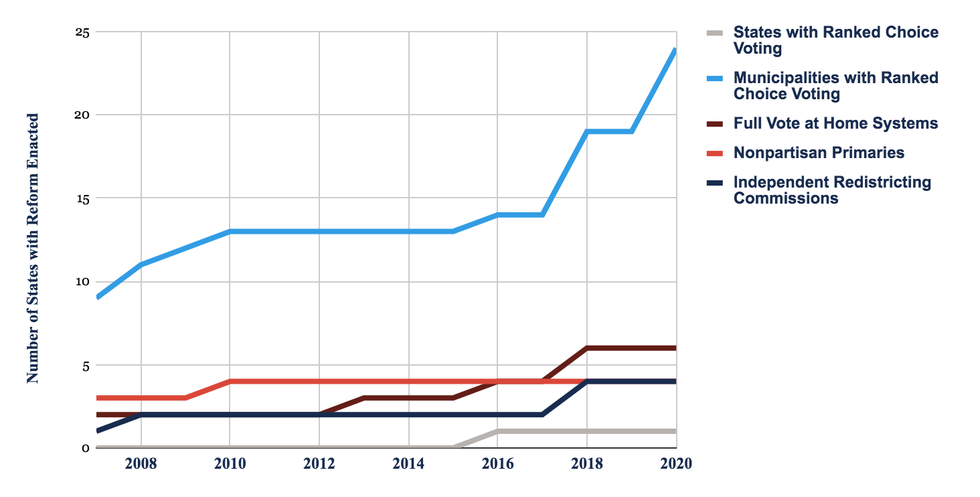 Democracy reform progress over the past decade.Unite America

If the last year saw electoral reform policies inch forward, the next year offers an opportunity to leap ahead.

Ongoing ballot measure campaigns in three states would end the practice of partisan gerrymandering by turning over the map drawing process to an ethics board in North Dakota, to a redistricting commission in Virginia and to an independent commission in Arkansas.

Voters in Alaska, Arkansas, and North Dakota will have the chance to approve final-four voting — a powerful combination of nonpartisan primaries with ranked-choice voting for the top four finishers in the fall — for state and federal elections. RCV is also looking to be on the ballot in Massachusetts, where more than 2,000 volunteers recently successfully completed the first online petition gathering drive to qualify for a ballot in the country's history. Florida could improve its standing, too, where voters will be asked to approve a top-two nonpartisan primary system.

While transitioning to 100 percent vote-at-home systems ahead of this November's elections is an unattainable goal for most states, the current coronavirus crisis has elevated the importance of implementing more permanent policy over the long-term, like Utah and Colorado have done. The 2021 legislative session will likely bring a flurry of legislation to empower all voters to cast more secure, informed and cost-efficient ballots. States like Arizona (where 79 percent of 2018 votes were cast by mail), Montana (72 percent) and New Mexico (63 percent) are leading candidates for making the switch.

Measuring the progress of the movement to put voters first is an important practice, as our community must demonstrate how quickly we are advancing policies that put voters first.

Progress on many important issues — from women's suffrage to gay marriage — has often started slowly, and then happened all at once. This year promises to serve as a potential inflection point that can begin to rapidly accelerate the progress being made. With some new wins on the board, we could be on the precipice of repeating a scale of meaningful change to our democracy not seen since the progressive era.