Can teenage election workers solve two of democracy's challenges at once?

High school seniors at a voting center in Minneapolis in 2018. People younger than 18 can be poll workers in all but five states.

Recruiting enough workers to staff the more than 200,000 polling places across the country has been a longstanding struggle. Now, the coronavirus is making the problem even worse — because older people, who are the majority of poll workers, are also at the greatest risk of getting the infection.

In response, states are getting creative, increasingly asking their younger populations — including some not yet old enough to vote — to step up and play an essential role in the election process. While it's not widely known, people younger than 18 can be poll workers in 45 states and the District of Columbia.

Recruiting members of Generation Z has become critical this year because aging Baby Boomers are especially vulnerable to Covid-19. But long before the pandemic transformed the country — and the way elections are run — in a matter of weeks, keeping up the supply of election workers has long been a sore subject for election officials. And it has been getting worse.

Even in a year when the share of ballots cast remotely is sure to shatter past records, election officials are generally promising to keep a reasonable number of polling stations open for those who prefer them as well as those who require them, like many disabled or homeless voters. And that means several hundred thousand people will be needed to check in voters, verify their identities, register people in states where that's allowed on Election Day and then answer questions about voting equipment — which is brand new this year in thousands of locations.

The shortage is likely to be particularly acute in Texas and other states that have not done much to promote mail voting despite new surges of coronavirus. Handfuls of polling places have been shuttered in Fort Worth and San Antonio for Tuesday's primary runoffs, for example, because of a lack of people willing to staff them. Wisconsin infamously had to call out the National Guard to replace no-shows for its April primary.

The surge in the number of cities and counties struggling to find sufficient help on Election Day is made plain in the surveys of election officials taken after every election by the federal Election Assistance Commission. The number of jurisdictions reporting at least some difficulty in filling their poll worker jobs rose from only about one-third a decade ago to 70 percent in 2018.

The poll found that for every general election going back at least to 2010, fewer than one in five poll workers was 40 or younger. The surveys also consistently found about one-fourth of poll workers were 71 or older — results that make intuitive sense, because older people are likelier to be retired and have fewer weekday commitments while people in their 20s and 30s are generally working and committed to family obligations. 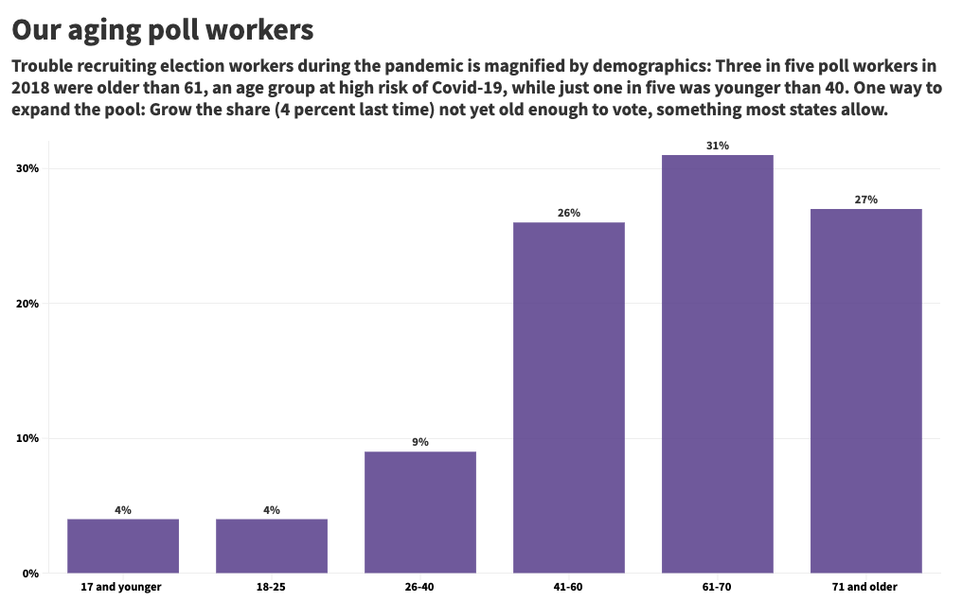 To help solve its version of the problem, Minneapolis implemented a Student Election Judge Program in the early 1990s and has since seen immense success with recruiting a bilingual, tech-savvy and ethnically diverse corps of high school students to work in its polling centers. The city partnered with local schools to help enlist teenagers, even establishing volunteer advisers at some schools to help advocate for the program and coordinate recruiting. The law in Minnesota, which usually has the strongest voter turnout of any state, permits high school students to work at polling centers after they turn 16.

The coordinator of the program, Caryn Scheel, says that over the years, Minneapolis has received far more applications than it needs — more than 800 in a typical year, when only about 400 students are needed on Election Day. She estimates that between one-fifth and one-quarter of the city's polling centers have high school students at work.

"They leave really inspired about what it's like to be part of a community during an election," Scheel said. "They really take it seriously, this idea that they are there to help voters to do what they can within the legal process to help people vote. And they find that very empowering,"

Three years ago the EAC singled out the Minneapolis program in a competition for recruiting, training and retaining election workers. Hamilton County, Ohio, won the same award in 2016 for its Youth at the Booth program, which recruits Cincinnati high schoolers older than 17 to work at the polls.

The effort extends to older students, too. Members of the Election Law Society at William & Mary's law school recently started looking for a way to contribute their expertise during the current election, especially in light of the pandemic.

The result, formally launched last week, is ASAP — the Alliance of Students at the Polls. The nonpartisan program plans to recruit fellow law schools across the country to build an online database of local resources related to voting and the electoral process. The organization also plans to recruit law students to be poll workers either on campus or at home, where many will be studying online this fall

"Having every state that has in-person voting be a part of our database and have resources available to people that want to volunteer in that state, if we can pull that off, I will consider this a huge success, in terms of just providing access and hopefully recruiting enough poll workers to open some more precincts across the country," said Max Weiss, co-president of the Election Law Society.

Poll work compensation varies widely, although about a quarter of states dictate a flat fee that's often less than the minimum wage for what is sometimes a 12-hour (or longer) day. Other states offer the minimum wage or allow local jurisdictions to pay more.

The National Council of State Legislatures has also promoted the idea of youth poll workers, pointing out that these digital natives have a willingness to operate electronic poll books and other voting technology.

Having more young people part of the electoral process, serving as poll workers or election judges, may motivate a younger voting block to cast their own ballots once they hit 18 years of age.

Scheel, of Minneapolis' Student Election Judge program, said surveys of participants show students are much more likely to vote as a result of being part of her program.

"You look at research that has been done on youth voter participation and you find that the earlier people get involved, the more likely it is that they'll stay involved," she said.

The notion of using poll worker jobs to promote high schooler civic engagement crosses ideological lines. The most recent state to allow teens to do the work was reliably Republican Alabama, which made the switch last year.

From Your Site Articles
Related Articles Around the Web
civic engagement