Vermont will soon send all registered voters a mail-in ballot ahead of general elections.

While much of the country's election reform legislation has been rife with partisanship, Vermont is bucking that trend.

Republican Gov. Phil Scott signed into law on Monday a measure that will automatically send Vermont's 495,000 registered voters a mail-in ballot ahead of statewide general elections. The General Assembly approved the legislation on a bipartisan basis last month.

Vermont's collaborative effort to expand voting access stands in stark relief from other states in which Democrats and Republicans are pushing opposing agendas. Following the 2020 election, Democrats have largely advocated for voting easements, whereas Republicans have backed restrictive measures.

Last year, Vermont was one of a handful of states that decided to mail every voter a ballot to make participating in the election easier and safer amid the Covid-19 pandemic. As a result, nearly three-quarters of all registered voters in the state cast a ballot in the 2020 election, and most of them did so early or by mail.

Because the temporary expansion was so popular, state lawmakers decided to make it permanent. The newly enacted law will also give voters the opportunity to "cure," or fix, any mistakes with their ballot, such as a missing signature.

During last year's pandemic-era election, California, Nevada, New Jersey and Washington, D.C., also decided to mail every voter a ballot for that election. Additionally, Montana gave discretion to its 56 counties, most of which decided to proactively mail voters a ballot. Five more states already conducted their elections primarily by mail before the pandemic: Colorado, Hawaii, Oregon, Utah and Washington.

Like Vermont, Nevada also recently decided to make its temporary vote-by-mail expansion permanent. Last week, Democratic Gov. Steve Sisolak signed into law a measure that requires voters to opt out of, rather than opt in to, receiving a mail ballot. 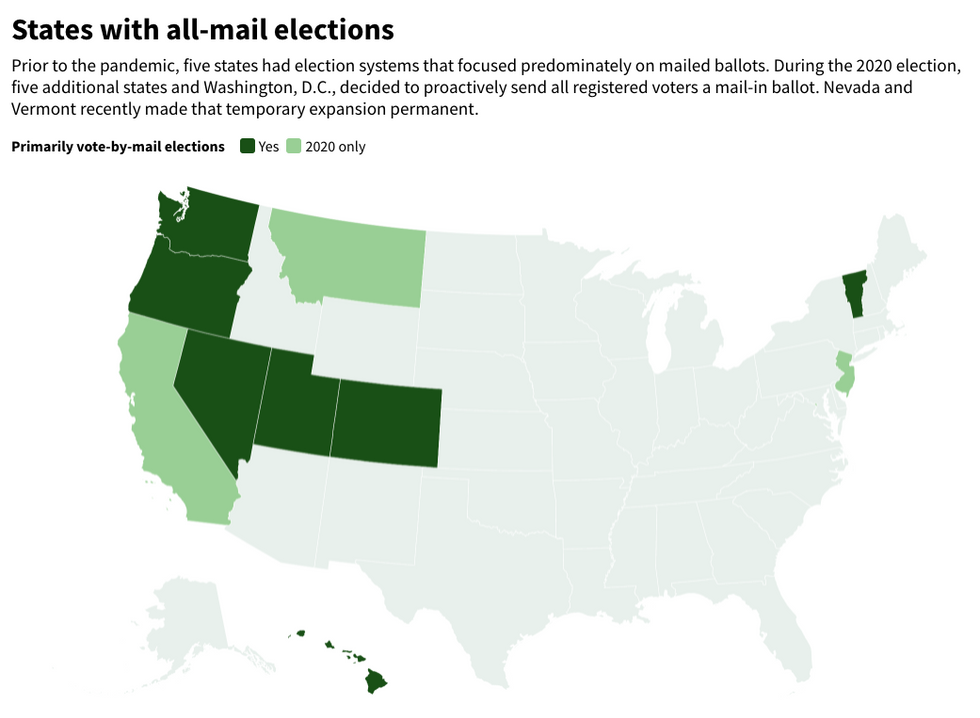 In a statement Monday, Scott said he signed the bill because "I believe making sure voting is easy and accessible, and increasing voter participation, is important."

But the governor added that this vote-by-mail expansion should not be limited to just general elections, which already have the highest voter turnout. Scott asked the General Assembly, when it reconvenes in January, to extend the bill's scope to include primary and local elections, as well as school budget votes.

Scott's support for expanding vote by mail access is significant considering several Republican-led states are seeing the exact opposite. In Florida, Georgia and Texas, GOP lawmakers and governors are working to roll back mail voting and impose new, stricter rules. Thus far, Kentucky is the only state with a Republican-controlled legislature that has approved voting expansions.