Kentucky is the only state with rules that make it virtually impossible to vote in person if an absentee ballot has been requested.

More Americans will be casting their ballots by mail this fall than ever before. But in a year as chaotic and unusual as this, voters' confidence levels and best-laid plans can change quickly.

So what happens when people receive an absentee ballot but decide that heading to the polls is the more reliable or even convenient option than using the Postal Service or a drop box ? Or what if they apply to vote by mail but their envelope never shows up?

In every state except Kentucky, these are not insurmountable problems. But the degree of permissiveness varies considerably for voters who change their minds about their voting method of choice. 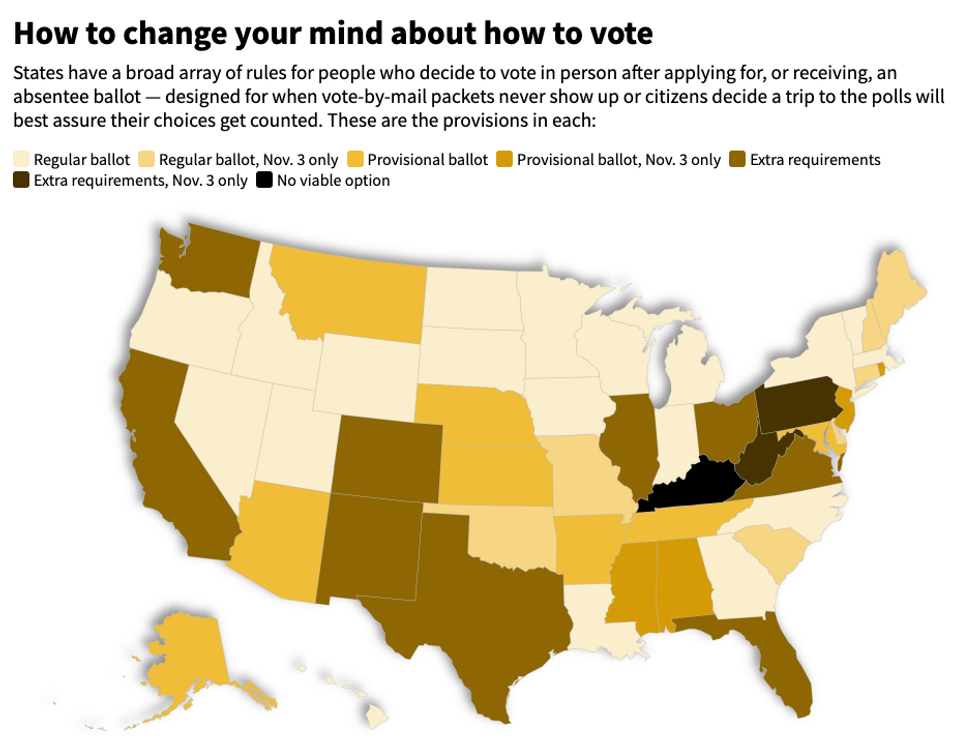 With nine states (and D.C.) automatically sending all active registered voters an absentee ballot, and 10 others sending applications statewide to encourage people to vote remotely, the share of ballots being cast by mail is virtually guaranteed to set a record. (It's been about one in four nationwide for several elections, and estimates it could be double that in 2020.)

But since President Trump is working to promote his baseless claims that mail voting incubates fraud, and given the Postal Service's recent travails, millions seem destined to make a late decision to use a voting booth instead — despite this year's unique risks of coronavirus exposure. Polling and early voting shows more Democrats relying on the mail and more Republicans relying on a trip to the polls.

An analysis from the nonprofit National Vote at Home Institute found D.C. and 19 states — including battlegrounds Wisconsin, Michigan and Georgia — where voters have the widest latitude to change their minds, or recover when a requested vote-by-mail packet does not arrive.

Essentially with no questions asked, they can cast a regular ballot in person on Election Day or at an early voting location. Seven other states, purple New Hampshire among them, will only allow this on Nov. 3.

A dozen states automatically hand provisional ballots to people who show up to vote after receiving or applying for an absentee ballot. Those ballots are as good as regular ballots but aren't counted with them. Instead, they are tabulated only after election officials make sure the voter's registration is in order and no double-voting occurred.

Eight states, among them presidential tossup Arizona, offer this option whenever polls are open. Four restrict it to Election Day.

It gets more complicated for voters in much of the rest of the country, where a range of additional rules may apply. The most common is a requirement that voters bring their not-completed absentee ballot with them if they want to use a voting booth instead. Other states have complex rules for people who want to cancel a vote they already cast by mail and choose different candidates in person.

Nine places — including the big swing states of Florida, Ohio and Texas — apply these rules during early voting and on Election Day. Battleground Pennsylvania and West Virginia will allow people to pass through the hoops for such last-minute switches on Nov. 3 only.

And then there's reliably red Kentucky, where a voter who requests an absentee ballot must complete it — or, if they claim they are unable to, or it never shows up, there's a set of early deadlines and paperwork rules that is so complicated compliance is virtually impossible.