This next cycle of redistricting looks very similar to the last decade, in which most maps were subject to partisan gerrymandering.

Next year's redistricting landscape is, at best, a mixed bag for good-governance advocates. Although the mapmaking process has become fairer and less politicized in a handful of states over the past decade, partisan gerrymandering will still have a profound impact on representation across most of the country.

Democrats had high hopes of taking back enough power in state legislatures to have close to parity in the line drawing with Republicans, but they were totally shut down on Election Day. At the same time, while Virginians voted to bleed politics out of the process, Missourians voted to push their state the opposite way. And proposals to reform the system in six states died because they could not get on the ballot, yet another consequence of the coronavirus pandemic.

The result is a power dynamic for the next drawing of congressional and legislative boundaries that's only marginally different than a decade ago. The two parties will retain control over the process in 39 states, just three fewer than last time. And the GOP will run the table in twice as many states again, with only a hair less dominance over the Democrats than in 2011.

It is a far cry from a central aspiration of the democracy reform movement, which has a mantra about what it will take to fix the system: Voters must be able to pick their politicians instead of the other way around. And that can't happen if elected officials have the power to use contorted cartography to ensconce themselves in power for 10 years at a time.

"For those who oppose gerrymandering, we have our work cut out for us," said Alex Tausanovitch of the Center for American Progress, a progressive think tank that advocates for redistricting by panels of political independents. "Strong reform is still only in a handful of states, so we have a long way to go."

For such groups, the year's singular highlight was in Virginia — although the measure that secured 66 percent this fall in a statewide vote falls short of what advocates are striving for.

The state has done redistricting the traditional way, through the legislative process, where partisan power and lawmaker self-preservation are paramount. From now on, the first crack at drawing the maps, for the General Assembly and 11 congressional districts, will go to a bipartisan panel of eight citizens and eight legislators.

But the maps need three-fourths majorities for approval — a high hurdle to assure they'd have some support from both Republicans and Democrats, and politicians and lay people, but also raising the possibility of deadlock. And if that happens the mapmaking gets reassigned to the state Supreme Court, whose justices are chosen by the Legislature. (The court is now dominated by conservatives although the elected branches in Richmond are Democratic.)

While Virginia moved toward redistricting reform this fall, Missouri moved away from it.

Voters narrowly decided to abandon an innovation they approved just two years earlier: creating the new post of nonpartisan state demographer with the assignment of drawing lines that promote partisan fairness and electoral competitiveness. Instead, legislative boundaries will probably be set by GOP-majority state courts (because the threshold for adoption by bipartisan panels is impossibly high) and the congressional lines by the GOP-run General Assembly.

And the system may get held up in court, because civil rights groups are bound to contest the voter-approved mandate that legislative lines be based only on the population of adult citizens — not all people, as is the case almost everywhere.

Voters in both Colorado and Michigan approved truly independent commissions in 2018. Once the population details from this year's census are finalized, next year they will set about realigning their state's congressional and legislative boundaries alongside similar panels in five other states: Arizona, California, Idaho, Washington and Montana, the last of which is likely to get a second House seat thanks to population growth.

But another such commission, approved by the voters in Utah in 2018, was essentially neutered this year, when the GOP-majority Legislature enacted a law saying the panel's work was advisory only.

Alaska will also use an independent commission, but only for its legislative maps since it has a single at-large House district. Hawaii and New Jersey will employ commissions made up of politicians, but in general they may not run in the districts they draw.

But the redistricting power will remain in the hands of elected politicians in more than three-quarters of the states. The GOP has secured the dominant advantage for a second straight decade because it has won unfettered control over the process in 21 states — Texas, Florida, Ohio and North Carolina among them — accounting for as many as 185 House seats, better than two out of every five, depending on precisely how reapportionment turns out.

Although it's not clear how many more districts they can carve out for themselves than they did in 2011, their continued redistricting advantage will only help the Republicans' already solid prospects for picking up the half-dozen or so seats they will need to win back the House in 2022. Such midterm elections almost always favor the party not in the White House in any case. 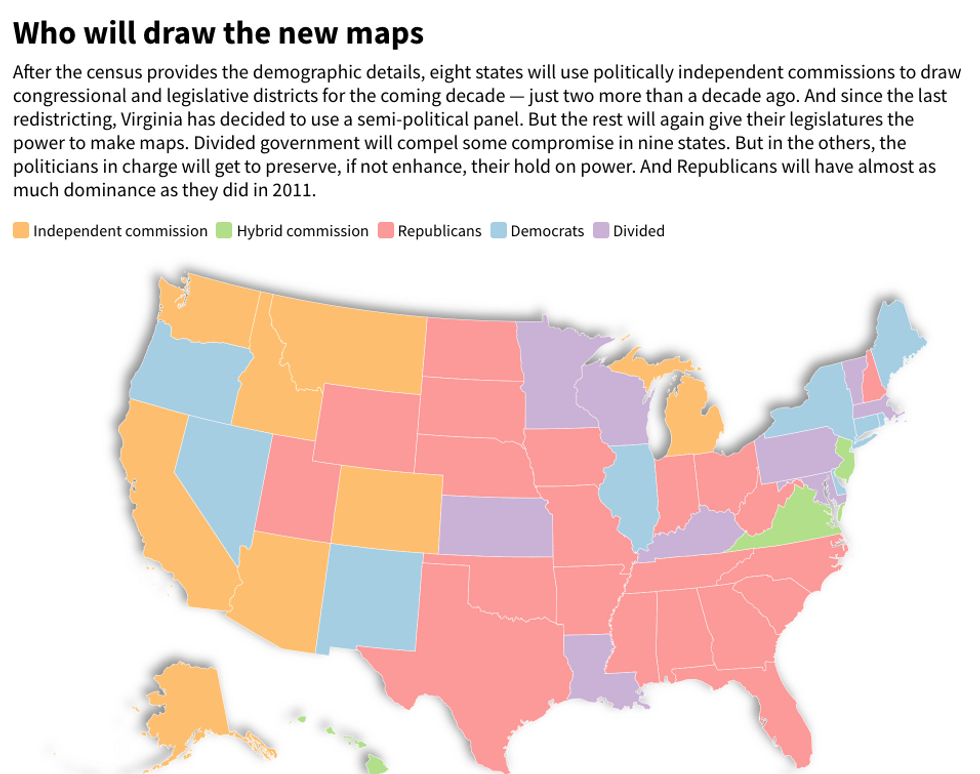 Democrats will dictate the mapmaking terms in just nine states likely to be allocated a combined 66 seats, Illinois by far the biggest among them. Pennsylvania and New York are the biggest of the other nine, with about 70 seats, where there will be divided control over the governor's mansions and statehouses.

Democrats were hoping to break some of the GOP strongholds in state capitals, but their blue wave never formed. In fact, the only legislature that flipped this fall was New Hampshire's — in favor of the GOP.

This was despite a $4 million campaign by the National Democratic Redistricting Committee, led by former Attorney General Eric Holder, to end or limit GOP remapping power in nine states. Most of the money was spent in North Carolina, Texas and Wisconsin — but the returns were marginal.

Democrats picked up enough seats in Madison to back up Gov. Tony Evers if he vetoes lines drawn by the GOP Legislature. Oregon elected a Democratic secretary of state, Shemia Fagan, who would take over redistricting if the Legislature reaches an impasse. Democrats gained the majority on the Michigan Supreme Courts and cut the GOP majority to 4-3 on the Ohio Supreme Court, two tribunals that may well be called on to step in and set the final boundaries in battleground states.

"Even in what we now know is an incredibly challenging political environment, we are in a profoundly better position than we were in 2011 to achieve the most fair redistricting possible," the NDRC said in an email following the election.

"The last decade of targeted voter suppression efforts and gerrymandering has given an advantage to conservatives going into the 2021 redistricting process," Holder asserted in a fundraising appeal after Election Day. "In some states, our grassroots movement will be the last line of defense to achieving fair maps."

Such efforts largely came to naught this year. The pandemic led to citizen-led redistricting initiatives failing to get on the ballot in six states. Campaigns in Arkansas, Nebraska, Nevada, North Dakota, Oklahoma and Oregon all either fell short of signature requirements or their workarounds failed to surmount legal challenges. Covid-19 also caused legislative sessions to end prematurely, cutting off efforts to get additional redistricting measures on the ballot in many states, most notably Illinois.

Although such campaigns came up short, state courts may well step in if next year generates a fresh stack of partisan gerrymandered maps.

Last year, the Supreme Court ruled 5-4 that the federal courts have no constitutional reason to referee disputes over maps drawn to be way more red or blue than a state's electorate. But the justices said state courts could set limits on partisan cartography.

By that point, the Pennsylvania Supreme Court had already thrown out congressional maps drawn by Republicans in Harrisburg for violating the rights of Democrats under the state constitution — resulting in new maps where Democrats now hold half the 18 seats, up from just five.

A year ago, state judges in North Carolina ruled that GOP-drawn maps similarly violated that state constitution's guarantee of fair elections, and new maps of 13 congressional districts used in November resulted in two new Democrats getting elected to join just three others.

Fair elections clauses can be found in about half the states' constitutions, suggesting an opening for citizens aggrieved after the next wave of mapmaking ends.

"In 2010 people knew about partisan gerrymandering, but the number of people really getting proactively involved has significantly increased since," said Katie Fahey, who led the grassroots campaign to create Michigan's independent commission and now runs the democracy reform group The People. "No matter what there's going to be a lot more people paying attention this time."

Even if a state doesn't have an independent process, citizens can make their voices heard in public hearings, which are mandatory in half the states and common practice in the other half.

"No matter what issue you care about the most, you have to care about redistricting first," said Chris Lamar, a redistricting expert at the Campaign Legal Center. "Because that will determine whether or not you are represented fairly or if your representative will listen to you."